Aamir Khan liked the trailer of Akshay Kumar’s film ‘Laxmi Bomb’, said- I wish it would be released in theaters; Khiladi Kumar reacted 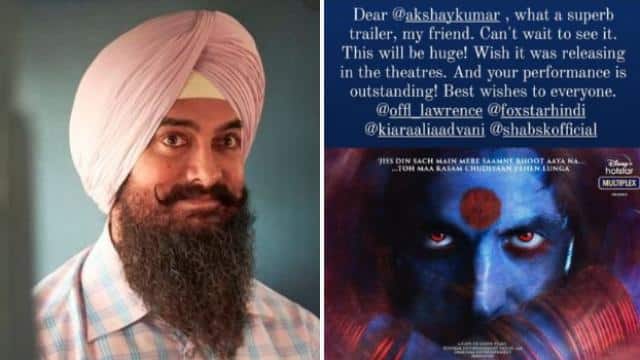 Aamir Khan tweeted, “Dear Akshay Kumar, what a great trailer, my friend. I can not resist myself to watch this film. This film has been made on a large scale. I wish it were released in theaters. And your performance looks very good, good luck to all. “

Dear @akshaykumar, what a superb trailer, my friend. Can’t wait to see it. This will be huge! Wish it was releasing in the theaters. And your performance is outstanding! Best wishes to everyone.https://t.co/4Cz0sc9Y94@offl_Lawrence @foxstarhindi @advani_kiara @Shabinaa_Ent

Reacting to this, Akshay Kumar writes, “Dear Aamir Khan, thank you for writing such beautiful words. You have always appreciated good work. Your prayers mean a lot to me in this difficult time. Your words have touched my heart, my friend. “

Dear @aamir_khan , thank you so much for your kind words and supportive encouragement, truly means a lot in these heavy times 🙏🏻 So touched my friend. #MenSupportingMen https://t.co/l80KXBqhlS

Fan asked Sushmita Sen- When are boyfriends getting married to Rohman? Actress gave a cute answer

Let us know that Aamir Khan and Akshay Kumar do not talk much on social media, but whenever they do, they are in the headlines. Earlier, Aamir Khan tweeted for Akshay Kumar and producer Sajid Nadiadwala when Lal Singh was clashing the release of Chadha and Bachchan Pandey.

Sensex falls by more than 1000 points; shares of these big companies in Nifty incurred losses