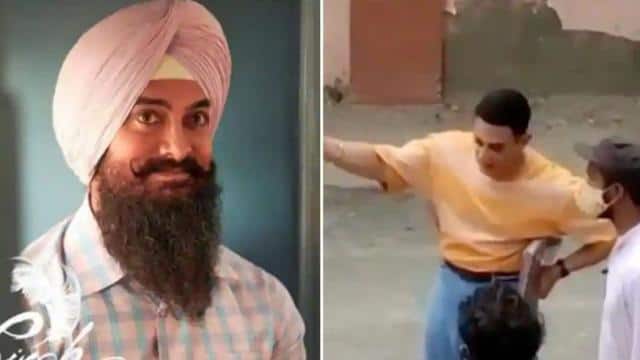 Bollywood actor Aamir Khan is currently busy shooting for the film ‘Lal Singh Chadha’. Many of his avatars will be seen in this film. Aamir has changed many of his looks in it. Recently, Aamir Khan’s young look from this film has been leaked on social media. In the video that is going viral, Aamir Khan is seen in Orange T-shirt and Blue Jeans. According to the news, Aamir is currently shooting in Delhi. At the same time, Kareena Kapoor Khan has also arrived in Delhi for the shoot a few days ago.

Significantly, Kareena Kapoor Khan is pregnant. In such a situation, his baby bump is now visible. Kareena, who plays the lead role in the film, is not in the mood to take a break during pregnancy. In the meantime, she will work continuously. According to E-Times, since Bebo’s baby bump is now visible, VFX will now be used to hide it. He further said that Kareena has yet to shoot 100 days for ‘Lal Singh Chadha’.

The film also stars Vijay Sethupathi and Mona Singh in pivotal roles. Written by Atul Kulkarni and the film is directed by Advait Chandan. The film will be produced by Viacom 18 Studios and Aamir Khan Productions.

Javed Akhtar supported Karan Johar on the drugs party video, said- If some farmers had been invited to the party too…

Let me tell you that Aamir Khan’s film ‘Lal Singh Chadha’, released in 1994, is a Hindi remake of the film ‘Forest Gump’. It was directed by Robert Jamaakis and the story was written by Winston Groom. Tom Hanks played the lead role in the film.

Diesel price drops for third consecutive day, know how much the price has become in your city

Pharmaceutical companies have given rich earnings to investors, have given more than double returns in 6 months