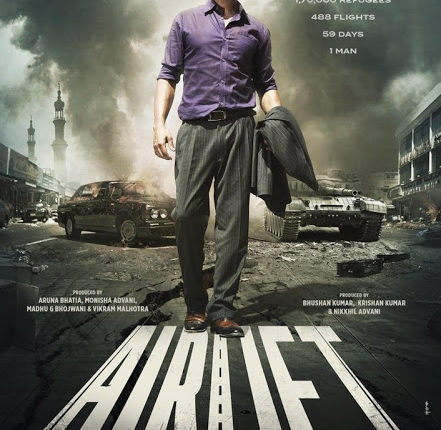 The veteran actor himself did the release of the first poster of the movie, “Airlift” starring superstar Akshay Kumar. The film is based on a Guinness record movement that occurred during the Iraq-Kuwait war (1990-1991) where a large number of Indians were evacuated.

“Airlift” has actress Nimrat Kaur, of “The lunch box” fame, in the female lead and is directed by the well-known Raja Krishna Menon.

The poster reveals a flying aircraft behind the actor all in black and white. The runway is covered with fumes and smoke. On the poster is written, “1,70,000 Refugees, 488 Flights, 59 days, 1 man” along with Akshay’s caption saying,

How many people know about the Kuwait evacuation? I’m proud to be part of a film that brings this true story alive #AirliftTeaserTomorrow

And “India airlifted over 1, 70,000 people from Kuwait in the largest human evacuation in history,”

Nikhil Advani, the co-producer of the movie also shared a post on Twitter “The sad thing is we don’t need to #RewindTo1990. The innocent are still the collateral damage in any war.”

The history on which the movie is based on, the clash between Iraq and Kuwait related to oil production. When Saddam Hussein invaded Kuwait in 1990, the royal family of Kuwait escaped, thus leaving the state and the people abandoned. The city ended up being looted and the people suffering deeply. 170,000 of them were Indians who were left with no home and money.

Bhushan Kumar’s “Airlift” is an awaited movie based on a real-life event where a hero by name, Ranjit Katyal (Akshay Kumar), an Indian businessman who was more of a citizen of Kuwait. He was successful in carefully evacuating all the 170,000 Indians back to their homes in India by joining hands with the Indian Government. This very heroic act brought India a Guinness world record and is sure to be a thriller for the audience. The film is all set to hit the screens on January 22, 2016.

#MALIATTACK: 80 PEOPLE FREED FROM THE 170 HOSTAGES TAKEN IN MALI