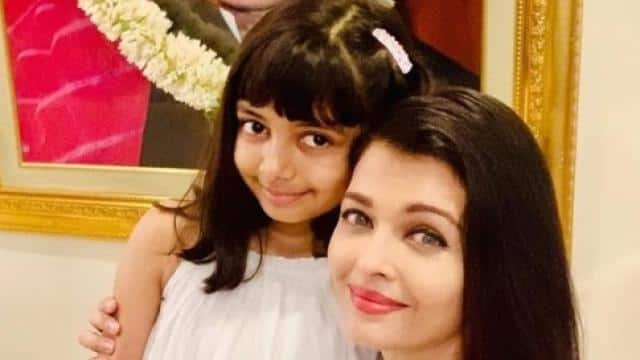 The month of July 2020 was very difficult for the Bachchan family. During this time Amitabh Bachchan, son Abhishek Bachchan, daughter-in-law Aishwarya Rai Bachchan and granddaughter Aaradhya Bachchan, were all found to be corona virus infected. Was admitted to the hospital for some time, later on home quarantine. Aishwarya Rai Bachchan is less active on social media. Recently, on the occasion of Teacher’s Day, Aishwarya shared a picture of daughter Aaradhya Bachchan, but a little late.

Let us know that Aishwarya is spending time with family these days. She was seen in the 2018 film Fanne Khan. She was accompanied by Anil Kapoor and Rajkumar Rao in the lead role in the film. However, the film could not do much at the box office.

Aaradhya and Abram pair will be an onscreen hit
Shah Rukh Khan and Kajol’s duo has been an onscreen hit. The duo have given several hit films together and Shah Rukh feels that the only pair that can replace their pair is Abram Khan and Aaradhya Bachchan. Actually, in an interview, Shah Rukh was asked which of his and Kajol’s hit pair can replace Ranbir Kapoor-Deepika Padukone, Ranveer Singh-Deepika Padukone, Alia Bhatt-Siddharth Malhotra and Fawad Khan-Sonam Kapoor .

Shahrukh names his son and Amitabh Bachchan’s granddaughter Aaradhya Bachchan. After which Kajol says, Abram is younger than Aradhya. Shah Rukh immediately responds to this thing of Kajol, age is not seen in love.

At the same time, when Amitabh Bachchan was asked about this comment of Shahrukh, he said, ‘Ghee sugar and milk cream in his mouth’.

Let me tell you that in the year 2018, Big B wrote a picture of Aaradhya while sharing a picture with Abram, Shah Rukh Khan’s little Abram, who not only thinks and believes but also fully believes that I am the father of Shahrukh Khan. I am At the same time, he is surprised that I do not live with him in Shahrukh’s house.

Shahrukh commented on this post of Big B, Sir Aya Karo Na … Stay home at least with Abram on Saturday. He has some very fun games on his iPad.