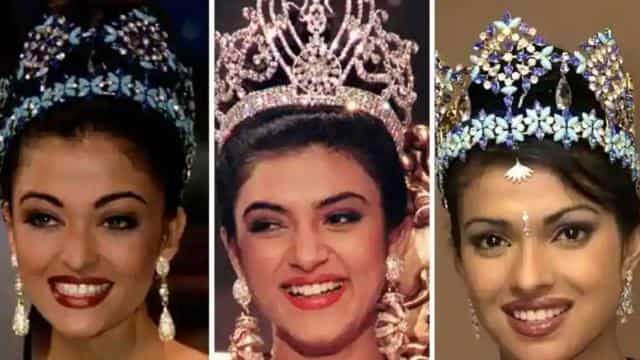 What is the one thing that is common between actress Aishwarya Rai Bachchan, Sushmita Sen and Priyanka Chopra? All three have been winners of the beauty pageant. And all three have got fame in Bollywood industry. Has become famous. Sushmita Sen became the first Indian woman in 1994 to win the title of ‘Miss Universe’. At the same time, Aishwarya Rai and Priyanka Chopra were Miss World 1994 and 2000.

Once during the interview, Sushmita Sen was asked that she was less successful than Aishwarya and Priyanka in the industry. What was the reason behind this? A video of Sushmita’s answer to this question is going viral on social media. It has got more than two lakh views in just two hours.

The Journalist asked that Aishwarya and Priyanka have achieved a great deal. You got a little less according to them. Sushmita says that very few, but very few people have done what Priyanka Chopra has done for us. We are all proud of him.

Journalists further ask what the two women who would become Miss Universe would like to say after this. In such a situation, Sushmita Sen corrects her and says that after me, Lara Dutta has become Miss Universe. And after that we have not found any Miss Universe yet. But I will definitely get it, because our time has come. As you can see we are winning in many things from the Olympics. And will win.

Let us tell you that Sushmita Sen is making a comeback on the big screen from the web series ‘Arya’. In such a situation, it is the story of a mother who is ready to go to any extent for the safety of her children. The trailer of the show has been released. It shows a glimpse of a story of family, love, crime and being free from sin. Sushmita plays the role of Arya.

Bulbbul Teaser: Anushka Sharma shares teaser of her new horror film ‘Bulbul’, the film will be released on June 24

Sushmita said, “Arya represents all the weaknesses in a world full of strength, hard resolve and guilt, a world run by men. Personally for me it is a story of family, betrayal and a mother who is a child. Is willing to go to any length to protect. ” He said, “It took me a decade to get this kind of role and I am thrilled to be a part of this incredible story. I am thankful to Ram Madhwani and his team for giving me such a lifetime role.” ‘Neerja’ fame filmmaker Ram Madhvani’s show Arya also stars Chandrachud Singh as her husband, who is involved in illegal drug trade.

UN warning, 4.9 crore more people may fall into the pit of poverty, crores of children and youth will be affected