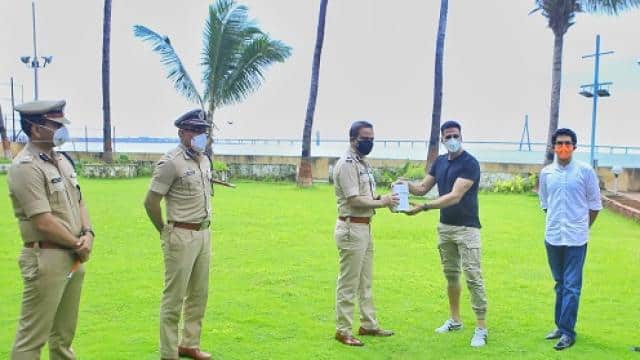 Akshay has helped the government as well as the Corona Warriors during the Corona virus epidemic. Akshay has once again helped the Mumbai Police. This time, Akshay has gifted 1200 smart wristbands capable of detecting Kovid-19 symptoms quickly to the Mumbai Police. Aditya Thackeray has given information about this by tweeting. He has shared a photo, in which Akshay is seen giving a wristband gift. Thackeray wrote with the photo, ‘Akshay Kumar ji handed over fitness-health tracking devices to Mumbai Police. It gives consistent readings of oxygen, body temp and heart rate and is helpful in fighting Kovid-19.

Talking about Akshay’s professional life, he will resume shooting for his upcoming film Atrangi Ray with Sara Ali Khan and Dhanush in October. Film director Anand Rai gave this information and said that due to Corona virus, the film’s set will be taken full care.

Let us tell you that Sara and Dhanush finished the first schedule of the film in Varanasi before the lockdown. The film was shot for a week and a half in Varanasi. The film was shot at several major locations in the city. The film stars Dhanush, Sara Ali Khan and Akshay Kumar. It will be a film adorned by AR Rahman’s music and written by Himanshu Sharma. It will be released on Valentine’s Day in 2021.

According to the news, Sara will be seen in double role in the film and Akshay will romance both Dhanush. The culture of Bihar and Madurai will be featured in this love story.