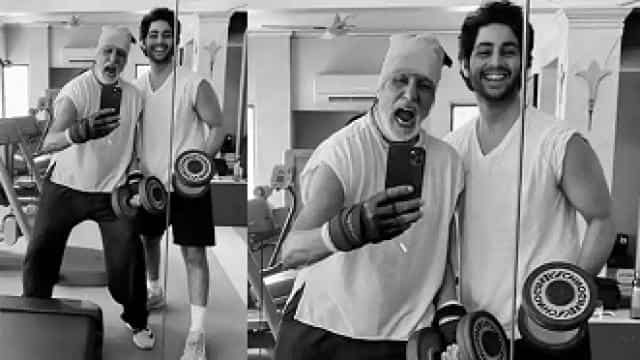 Amitabh Bachchan is taking full care of his fitness. Even though Big B cannot go out due to the lockdown, but at home he tries his best to keep himself fit. Now Big B has shared a photo with his grandson Agastay Nanda. In the photo you will see that Agastya has taken up dumbbells.

While sharing the photo, Big B wrote, Fight … Fight the Fit … Fit the Fight. Taking inspiration from Naati.

You see how excited Big B looks while exercising with the grandson.

Big B remembers meeting with fans outside Jalsa

Let us know that every Sunday, people gather outside their house Jalsa to see Amitabh, but due to the corona, this is not happening for the last few days. He is missing a lot to meet the fans. He has tweeted about this.

In lockdown, Taapsee Pannu did photoshoot in her washroom for magazine photoshoot

Anurag Kashyap will auction his Filmfare Award, corona test kits will be purchased with the money received

Big B has shared some photos outside of Jalsa on Sunday. Some cleaning workers are seen working in Jalsa. Amitabh shared the pictures and wrote in the caption, ‘Who says that Sunday’s well-deserved meeting has stopped at Jalsa Gate. Look at this. ‘

Talking about the work front of Big B, these days he is in discussion about his new film Gulabo Sitabo. In this, he will be seen working with Ayushmann Khurrana. It was recently announced that the film would not be released in theaters but on the OTT platform. Amitabh and Ayushmann had informed on social media that the film will be streamed on Amazon Prime Video on June 12.

Mukesh Khanna lashed out at Tittock users for sharing the video, saying – vulgarity and inattentiveness is going on among the youth