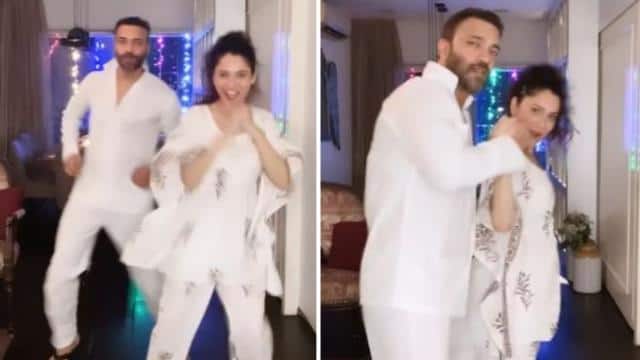 Ankita Lokhande, the popular face of TV, is very active on social media. Nowadays she is sharing many photos and videos with boyfriend Vicky Jain. Recently Ankita Lokhande shared a dance video of herself with Vicky. In this video, both of them are wearing white color outfits and are seen doing a tremendous dance on the song ‘Teri Meri’. Fans are praising this banging dance of both of them.

While sharing the video, Ankita writes, “Vicky and Anki, while dancing they too in night dress.” On this video of Ankita, fans are commenting one after the other. Some are calling their moves as ‘killers’ and some are saying that this is the best thing on social media, which they are able to see.

Please tell that more than 50 thousand likes have come on this video of Ankita Lokhande in one hour. Earlier, Ankita Lokhande shared a video in which he was seen feeding Kheer to both Abir and Abira (Vicky’s sister’s children).

Actor Amit Sadh has tried for suicide 4 times in Teenage, narrated the story himself

Ankita had told the fans that she had reached Vicky’s house for the children’s food. During this time, he wore a blood suit and a golden suit.

Photos were shared on Diwali
Ankita shared photos with Vicky on Diwali. During this time, both were seen in traditional outfits. The two looked lovely together.