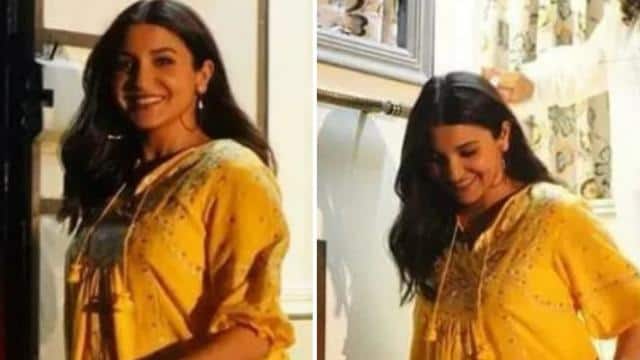 Anushka Sharma is spending time watching Kaun Banega Crorepati during her pregnancy period these days. Anushka Sharma praised the poem of Bhavesh Jha, contestant of ‘Kaun Banega Crorepati’ 11. The actress has shared videos of KBC 11 in her Instagram stories, in which Bhavesh Jha is reciting a poem on daughters. Anushka Sharma has written, ‘What a mature person Bhavesh Kumar Jha is. A beautiful poem and a beautiful mind. ‘ This poem was narrated by Bhavesh Jha at KBC with the title Beti Tum Bade Naona Ho…. This poem recited on daughters was also highly appreciated by Amitabh Bachchan.

Big B appreciated the poem and said that you have mentioned our society through this poem. Praising the poem, Amitabh said that this poem should be published somewhere, you give it to us and we will print it on our social media. Bhavesh Jha appeared in KBC 11 and that episode aired on 31 October 2019. In this episode, Bhavesh Kumar Jha won an amount of Rs 12,50,000.

Sana Khan was making a video on her honeymoon, Shouhar came and said – Begum is cold

Anushka Sharma is going to give birth in January. She is currently living in Mumbai with her parents. She has returned to Mumbai after spending time in Dubai with husband Virat Kohli. On Sunday, Anushka also praised Team India and Virat Kohli for winning the T20 series against Australia. Sharing a picture after the win, Anushka Sharma wrote, ‘Won the series and great team effort. Men in blue. Congratulations my love. ‘ Virat Kohli and Anushka Sharma are often in trend on social media. Now the fans are eagerly awaiting the arrival of the little guest in their house. The two married on 11 December 2017. Earlier, both were in a relationship for a long time.

Delhi government’s gift to workers Get a labor card made sitting at home with just one call, you will get these benefits