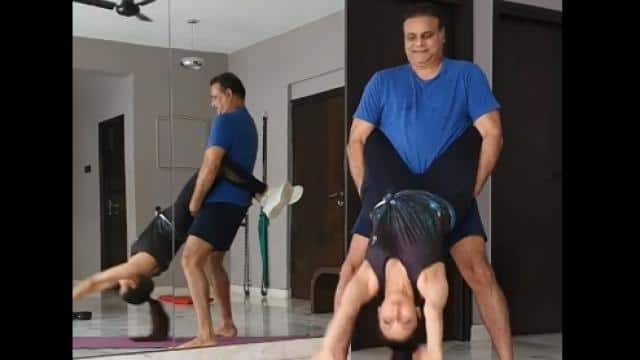 Bhagyashree, who won everyone’s heart from the film Maine Pyar Kiya, is active on social media and keeps sharing her many videos and photos. Now recently she has shared a video of her with husband. In this video, she is seen doing a workout with her husband. You see how Bhagyashree’s husband Himalaya is balanced. Fans are very fond of this video of both of them and are praising the bonding of both of them. Although this video is old.

Actually, Himalaya has undergone shoulder surgery recently. Bhagyashree shared a photo of Himalaya from the hospital, writing, ‘The surgery is complete. This is not a time when you like to go to a hospital but unfortunately due to an accident we had to do so. Dr. Dinshaw Pardiwala has done a fantastic job. I thank the Ambani staff, doctors and nurses. Corona positive patients and staff were present on the second floor, so there was no problem. I want to thank all my loved ones. We will return home soon ‘.

During an interview a few days ago, Bhagyashree told that both of her children Abhimanyu and Avantika have given them a lot of motivation to act. Let me tell you that Bhagyashree worked with Salman Khan in the film ‘Maine Pyar Kiya’. She became very popular with this film. But then they got married and after marriage they took a break from the acting world. However, later Bhagyashree has worked in TV shows like ‘Kachche Dhoop’, ‘Paper Ki Kayak’ and ‘Laut Aao Trisha’. Now she will soon be seen in superstar Prabhas’ film.

Let us tell you that Bhagyashree’s son Abhimanyu Dasani made his Bollywood debut with the film Mard ko dosti nahi. He will now be seen in Shilpa Shetty’s film ‘Nikamma’.

Chinese company could not withstand a month’s protest against India, it was sold out

Costly air travel may now be increased by 3% in ATF