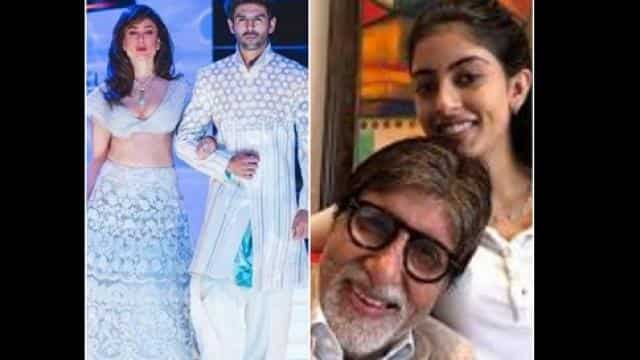 Amitabh Bachchan’s granddaughter Navya Naveli Nanda recently did an act that will make her proud too. Actually, Navya has launched a platform on social media called Aara Health. Through this, problems related to women’s health will be solved. Her mother Shweta Bachchan and maternal uncle Abhishek Bachchan are very proud of this work of Navya.

TV actor Karan Kundra recently came on Instagram live chat with his co-stars Kritika Kamra and Pooja Gaur. Karan Kundra is called the Chocolate Boy of the TV industry. In such a situation, during the live session, a person called her a ‘girl’. The actor did not sit silent after hearing this. He gave such a reply to the troll that he stopped speaking.

Krishna Shroff, the daughter of Jackie Shroff and sister of Tiger Shroff, has been in a relationship with her personal life for some time. Now recently Krishna and her boyfriend Eban Hyams came live on Instagram on the completion of their first meeting for 1 year. The two were living with each other in Mumbai for a long time, but now Eban has moved back to Australia with his family.

Actress Aishwarya Rai was a great Bollywood star as well as a showstopper. Although Aishwarya Rai has kept distance from the big screen for some years, but during her time she had so much work that she could not give time to many projects. A few days ago, designer Ashley Rebelo shared old photos of Aishwarya Rai, in which she is seen in the avatar of a Greek God.

Karan Johar recently posted a video of his twins (Yash and Roohi) on social media. In this funny video, Yash and Roohi are seen playing with the shower. Karan is heard from behind saying what will you do with the shower. Yash says I want to wash you with this, let’s take off clothes quickly.

Karthik Aryan is a Bollywood star who rules the hearts of girls. The girls of his looks and smile are crazy. Not only this, every Bollywood diva from Sara Ali Khan to Ananya Pandey wants to work with him. But recently, Karthik revealed who his favorite actress is.

Personal data of many celebrities including Priyanka Chopra hacked

The data of several eminent personalities like Priyanka Chopra, Lady Gaga, Madonna, Nicki Minaj, Bruce Prirangstein, from a reputed media and entertainment firm based in the US have been stolen where hackers have hacked the personal data of these celebrities.

Kejriwal left the decision on public on lockdown, asked- what do you want?