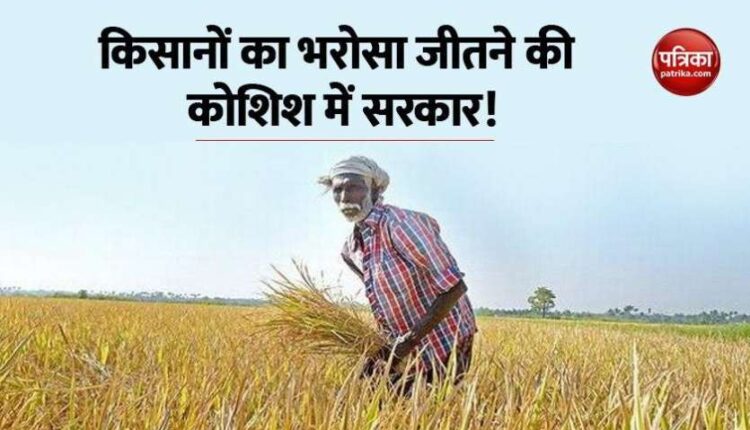 new Delhi. Many farmers from different parts of the country including Punjab, Haryana are protesting against the new Farm Acts being introduced by the Central Government. Meanwhile, the government on Monday released the data on the minimum support price (MSP) of paddy, trying to win their trust. According to the data, in just 48 hours, paddy worth Rs 10.53 crore has been purchased at MSP. Sheer wants to convey the message through this, farmers need not panic because the MSP will continue as before.

In fact, farmers fear that the new agriculture bill will end the MSP system and the entire command will go to private companies. This will not give the farmers their right. The government has set a target of purchasing 495.37 lakh tonnes of paddy for Kharif in the year 2020-21. The Agriculture Ministry said that till September 27, 5,637 tonnes of paddy has been purchased from farmers of Haryana and Punjab at Rs 1,868 per quintal MSP. At the same time, paddy procurement has started in the rest of the states. Apart from this, the government has set up nodal agencies to procure other crops. Through them, 34.20 tonnes of moong have been purchased from 40 farmers in Tamil Nadu till September 24 at a total MSP of Rs 25 lakh. The government has purchased 5,089 tonnes of coconut from about 3,961 farmers in Karnataka and Tamil Nadu at a total MSP of Rs 52.40 crore.

Approval for purchase of these crops
Approval has been given for the purchase of a total of 13.77 lakh tonnes of Kharif pulses and oilseeds (Kharif Crop) from Tamil Nadu, Karnataka, Maharashtra, Telangana and Haryana. At the same time, the purchase of cotton will start from October 1. The government has given responsibility to the Food Corporation of India (FCI) and the procurement agencies of the states that the farmers should not face any problem during the procurement. Also, arrange for them to get fixed prices.

Important news for Post Office customers, this big change can happen from October 1

Positive Pay System: RBI is making major changes on check payments, will be applicable from next year