Does your Health Inusurance Policy cover the cost of Corona Vaccine? 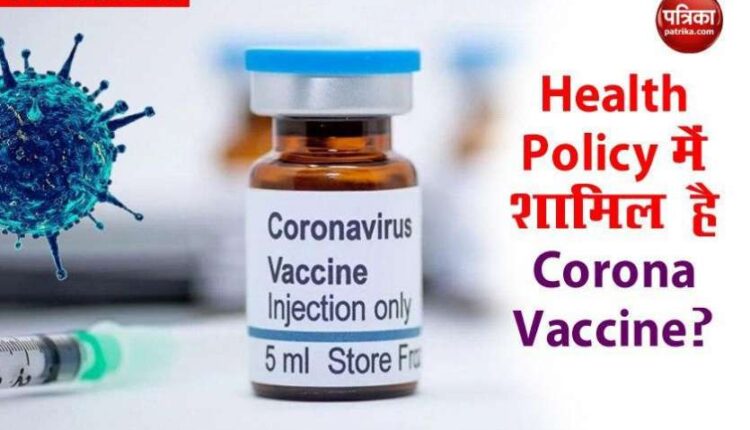 new Delhi. Bringing Coronavirus Health Insurance towards health insurance companies has given a lot of relief to the people of the country. The July data clearly shows that thousands of people are taking advantage of it. Now after treatment, a second question has arisen, whether the Corona Vaccine will also be covered in this policy. Such questions float on everyone’s tongue because the type of vaccine cost that has come out recently from pharma companies is not in everyone’s control. If the cost of the vaccine is also included in insurance, then it will benefit crores of the country, but the question also arises whether any vaccine can be covered in health insurance. Let us also tell you.

Also read: Zomato to give 10 term to female employees in a year, know the new policy of the company

After all, how much can a vaccine cost
The corona vaccine, which relieves the world of the Corona virus, is awaited. Which not only made millions of people sleep in death, but also shaken the economy of the world. According to the information, the corona vaccine may come soon. The Russian company is going to announce its vaccine on August 12. However, its value has not been mentioned in the media report. At the same time, the cost of the vaccine which is being jointly produced by Oxford University and Moderma Company can be from Rs 1000 to Rs 4500. At the same time, the price per dose for 2021, which Gavi and Bill and Malinda Gates Foundation are preparing together, can be 3 dollars, that is, from Rs 200 to Rs 250 per dose.

What does an insurance policy cover
A regular health insurance cover pays your pre and post hospitalization bills. Vaccine expenses are generally not covered by health insurance. Except for those vaccines that are planted when an animal is bitten or an antidote. Newborn baby vaccination expenses are met under the maternity policy. At the same time there are some policies which also cover the expenses of vaccination under the Outpatient Department Expenses.

Facility will be available in special insurance product
Nikhil Apte, Chief Product Officer, Health Insurance, Royal Sundaram General Insurance, said in a statement to an English media that they cover vaccination under their premium variant which also has an OPD of Rs 10,000. This variant includes routine immunizations such as hepatitis B or influenza. When the corona vaccine arrives, its expenses will also be included in it. According to experts, in the coming days, insurance companies can launch such products, which will also include vaccines. Which will also include the Corona vaccine, but currently the number of such products and coverage for vaccines under them is limited.

When Sushant Singh Rajput told his fans, I will come in a day or two, emotional throwback video of the actor