Fines imposed on those who flout rules in Delhi Metro, know how much was paid 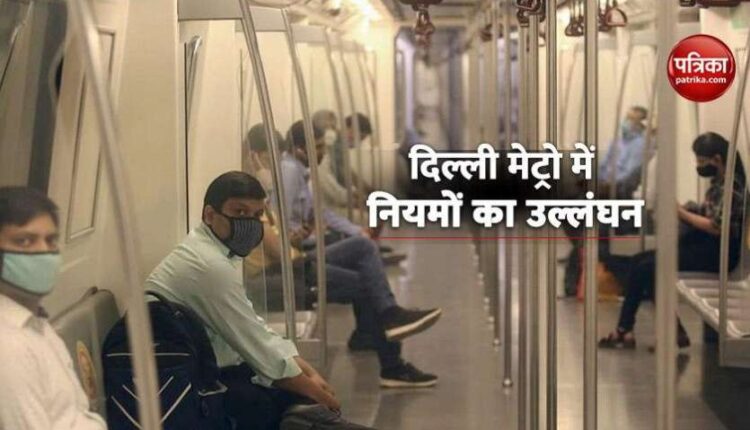 new Delhi. Delhi Metro service started for all passengers from Saturday, but the cases of corona are increasing continuously in the national capital, even though passengers traveling in the metro are seen flouting the rules. Penalties were recovered from 114 such guilty passengers. People are required to follow the guidelines issued by the government while traveling in the metro. At the same time, strict action is being taken by the metro on the negligents.

DMRC’s investigation campaign
On Saturday, an investigation campaign was conducted through flying squads on all lines. Under this campaign, it has been seen inside the metro whether passengers are following the rules in the metro. However, 114 passengers were caught flouting rules in the Delhi Metro through flying squads. At the same time, fines were also charged from all these passengers.

Penalty charged from 114 passengers
DMRC Executive Director Anuj Dayal said that the flying squads informed more than 200 passengers about the rules and left them out. He said 114 passengers were also fined Rs 200 under section 59 of the Delhi Metro Operation and Management Act. Flying squads caught all these people inside the metro by flouting rules.

Phase wise metro launched
Let us tell you that phase wise operation of Metrol has been started by DMRC. In the first phase, on September 7, the metro was started in two shifts from the Yellow Line. The Blue Line was then opened on the 9th. Both these lines are the most busy and congested metro line of Delhi NCR. After which all the lines were opened to the common people on Saturday.

DMRC chief appealed
Before opening all the metro lines, DMRC chief Mangu Singh appealed to the passengers to travel in the metro at least as much as possible. If possible, put your work under work from. He also asked not to go in the metro at peak hours. He had said that a coach of the metro train previously had the capacity to carry 300 to 350 passengers. Due to social distancing, she is now 50.