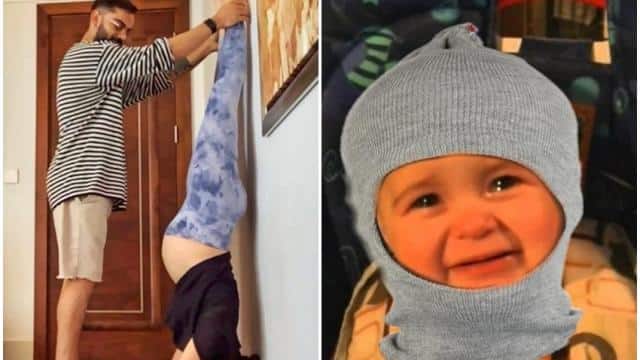 Mims are becoming viral on social media regarding the yoga photo of pregnant Anushka Sharma. Anushka shared a picture of herself a few hours ago. In which Virat Kohli is also seen. However Anushka has told that this is her old photo. Now social media users are giving their reaction on this photo of Anushka.

Sharing the photo, Anushka wrote, ‘This exercise hands-down is the most difficult exercise. Yoga is very important in my life. My doctor told me that I can do all the asanas that I used to do before pregnancy. For headstand, which I have been doing for many years, I take care that I use the wall for support and yes my husband also supports me for extra safety. ‘

Aditya Narayan went out with his girlfriend Shweta for a seven-day wedding procession, see first picture of bride and groom

Despite Anushka’s explanation, the trolls follow her. Trolls have described headscarf as risky during pregnancy. At the same time, some fans have also supported Anushka. One Twitter user wrote – ‘Through Yoga, there is an attempt to stay fit during Little Bean’s pregnancy and people are not digesting it. Please do your work.

1. Anushka Sharma during her pregnancy
2. Lazy me after looking at the pic: #viratkholi #AnushkaSharma #virushka pic.twitter.com/udRiFJJzIq

This little bean is staying fit in her pregnancy by doing yoga and people can’t even digest that. Get a life, please. #AnushkaSharma pic.twitter.com/zUxZKnHt9k

#AnushkaSharma Is Doing Shirhasan During Pregnancy ..

Anushka did headship under the supervision of Yoga teacher

Anushka further wrote, ‘I was doing this under the supervision of my Yoga teacher. I am very happy that I have been doing yoga even in pregnancy. Along with the fans, Bollywood celebs are also reacting a lot on this photo. It is becoming viral on social media as soon as Anushka shares her photo.

After coming out of jail, Bharti Singh shared this picture by sharing a photo with husband Harsh