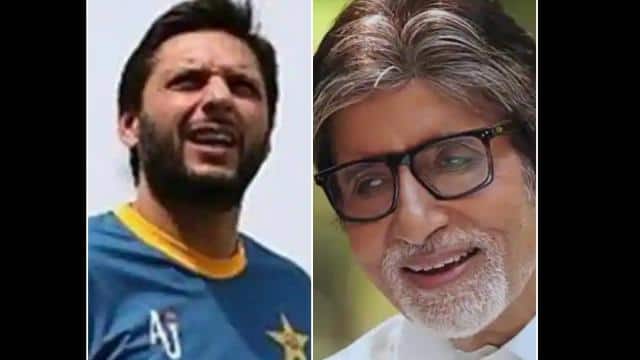 Former Pakistani captain Shahid Afridi has tweeted a tweet wishing Bollywood megastar Amitabh Bachchan and son Abhishek Bachchan to get well soon. There were reports late Friday of Amitabh Bachchan and Abhishek Bachchan being corona positive. Aishwarya Rai Bachchan and Aaradhya Bachchan were also found corona positive on Saturday morning. The actor’s four bungalows (Jalsa, Janak, Vatsa and Pratiksha) have been sealed by the BMC. Board of Containment Zone has been installed outside. Fans from all over the world are wishing the family well soon.

The news of Amitabh Bachchan and his family being Corona positive shocked the entire nation. Fans from every corner of the country prayed for his recovery. In this episode, former Pakistani player Shahid Afridi also made a tweet for Amitabh and Abhishek. Shahid Afridi has also recently recovered from the Corona virus outbreak. He too became a Kovid-19, which was informed by the player himself. Now Afridi is completely fine.

After winning the 2002 NatWest Trophy, Mohammad Kaif received a huge welcome in Allahabad, he felt like Amitabh Bachchan.

Best wishes for @SrBachchan and @juniorbachchan . Hope you recover well and soon.

Apart from Shahid Afridi, former Pakistani paceman Shoaib Akhtar also tweeted for Big B. Akhtar tweeted and wrote- “Get well soon Amit ji. Prayers from your fans across the border to get well soon. ”

Get well soon Amit ji. Prayers for a speedy recovery from all your fans across the border.

Let us know that in the last 24 hours in India, 28,701 new cases of corona virus have been reported and 500 patients have died. With this, the total number of corona positive cases in the country is 8,78,254, of which 3,01,609 are active cases. Also, 5,53,471 patients have either been cured or have been discharged from the hospital. According to data from the Ministry of Health and Family Welfare, so far 23,174 corona marozi have died in India.

Invest in these schemes for the happy future of children, there will be no shortage of money