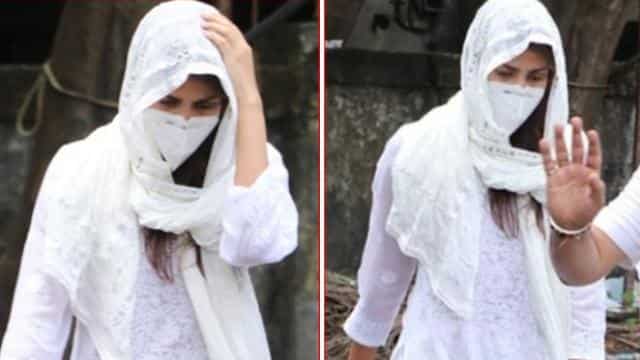 Bollywood actor Sushant Singh Rajput hanged his house in Mumbai yesterday and committed suicide. According to the news, Sushant was suffering from depression for the last several months, due to which he hanged himself and died. However, this has not been confirmed yet. At the same time a post-mortem report of his body has arrived. The report said that Sushant died due to hanging. Sushant’s post-mortem was done at Cooper Hospital in Juhu. Today is the funeral of Sushant. However, before the funeral, Sushant Singh Rajput has reached the alleged girlfriend Riya Chakraborty Hospital.

Many photos and videos of Riya from Juhu’s Cooper Hospital are going viral on social media, in which she is seen in a white suit salwar. The sadness on his face clearly shows that he is deeply saddened by Sushant’s death.

According to the latest news, the police is preparing to question his friends in Sushant Singh Rajput suicide case. The police will record the statements of Sushant’s friends Mahesh Shetty and Riya Chakraborty in the case. Because Sushant had called Riya just one night before his death, but he had not picked up the phone. The scope of the police investigation is around personal relations and close friends of Sushant Singh Rajput.

Let us tell you that Sushant remained in the discussion due to his personal life and relationships besides his films. Sushant’s relationship with Ankita Lokhande was for about 6 years. After their separation, Sushant’s name was also added to Kriti Sanon and Riya Chakraborty. Some people say that Sushant’s personal life may also be the reason for this suicide, which has always been very much discussed.