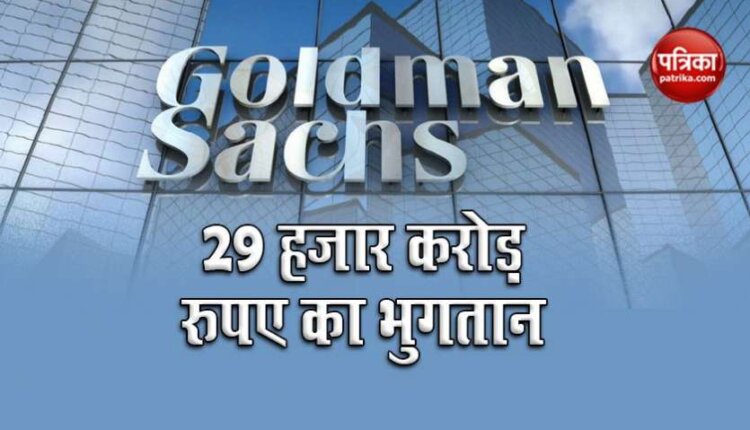 new Delhi : Goldman Sachs group will pay ₹ 29000 to the Government of Malaysia (Malaysia Govt). This agreement with the government in the Goldman Group has been done in exchange for the closure of only saffron regulatory proceedings of all kinds. In fact, the Goldman Sash Group is facing a number of cases to raise $ 1 million through the Savren Wealth Fund. This agreement allows Goldman Sachs to end the biggest legal proceedings since the 2008 financial crisis. Has reached close to

Good news! Domestic airfare will not be able to increase airlines till November, government increases aircapping

What is the whole matter – According to official information, Goldman Sachs group helped the Government of Malaysia to raise $ 6.5 Billion, or about 48000 crores rupees for 1mdb fund. This private company raised $ 600 million through 1 sale in 2012 to 13 The fee was raised by the prosecutor alleging that the entire amount in the Goldman Group was diverted to 1mdb officials and associates, which was later filed by the Malaysian government.
The Malaysian government has given a statement saying that although this agreement has been reached, the agreement will not have any effect on the case going on on Lout Teak Zhao and others.

The lawsuit started 2 years ago – The Malaysian prosecutor sued 3 branches of the bank in 2000 and later, 17 officers and former executives of Goldman Sachs were charged in the case, although the allegations against them in the bank were baseless but now fresh According to the agreement, Goldman Sachs has signed an agreement to provide Rs 29000 crore to the government to liquidate all cases against its subordinate companies and its existing ex-officers.

More than half the money will be given in cash – The Malaysian Finance Ministry has issued an official statement saying that according to this agreement, Goldman Sachs Group will give the government $ 2.5 million i.e. approximately ₹ 18000 in cash and the rest of the amount from 1mdb of the assets seized worldwide. Will raise

Bhagyashree Scheme will change the fate of the family, daughter and parents will also get financial help with scholarship