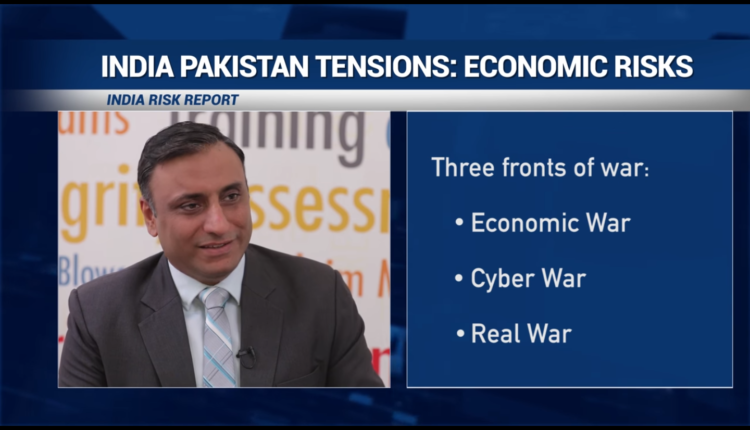 The retirement of Pakistan’s chief of army General Raheel Sharif in the last week of November had tense moments, with many observers arguing the possibility of his term being continued considering the tensions with India. Some commentators believed that the general would be looking for a “last hurrah” in plotting another attack against India, ostensibly in retaliation for the reported Indian surgical strike across the Line of Control in October. What several analysts tend to overlook is the economic ramifications of the increasing tensions between both countries. Pakistani commentators have seized onto the monetary losses which increased military rhetoric carries, and have argued that the costs of a conflict would deter India, especially since it has a lot more to lose. It is, therefore, important for Indian planners and strategy executives to delve into the wider ramifications of what even a limited escalation of the ongoing tensions would mean.

This is where India Risk Report does a commendable job in reviewing these risks, and it is great to see the one-man army of Maroof Raza discussing his expertise. A refreshing change in this episode was the role reversal in which Maroof shared his inputs and became a guest of the show; a welcome theme considering the topic.  The corporate perspective was provided by Mr. Garry Singh, the M.D of the risk consultancy firm IIRIS, which ostensibly produces the show. A little digging into the profile of the individual suggests that in addition to serving in the special forces brigade of the military, Singh also has a hands-on stint in top corporate companies. This is useful as it cements a sense of authority and integrity into his role as the main speaker at this show. One element the show lacked was the presence of more voices from the industry. While it was interesting to get perspectives from international participants, their limited segments should have been given more screen time, especially considering the role FDI must play in the years ahead. Also, the Chinese role in this tension, such as the call to boycott Chinese goods and the critical role played by their state government in supporting Pakistan should have been given a deeper consideration.

Episodes such as this one should also carry alternative views, with all speakers preaching to the choir about the morals of war, it is important for right-wing voices to share their perspectives. Not all corporates are risk averse, and it can be safely said that developments along the border will not entirely sway the boardroom. Adding to the perspectives, it would have been useful to have statistics which highlight how India is indeed winning the economic factor vis-à-vis Pakistan, and one segment which should have been played up is the overall superiority of India to survive and grow forward. Perspectives from the domestic defense industry should have been sought to show where we are faltering in developing indigenous mechanisms for our security, and what measures the “make in India” can become “Make for India” and “Safer India” campaigns.

A useful sequel story for this episode is to focus on the terrorism threat which India faces. The speakers at the end allude to the risks which a 26/11 type attack can mean for the Indian economy…. Correction…the global economy since we are now a global village. Terrorism is a major concern for us all, and if we can have an episode in which Maroof brings forward his perspectives on how to address this challenge, it would cater to the audience. It would be a valuable lesson for all of us, from a citizen perspective, and would illustrate useful pointers to the corporates who too can adopt mitigating measures in their vicinities.  Overall a good episode, in a unique series, it gave insights into how the corporate mind thinks into the possibility of a conflict, and an opportunity to importantly gain further perspective from the master military analyst Maroof Raza.

Air Pollution Is Not Only A Killer, It Is An Economic Disaster