Isha and Akash Ambani included in Fortune’s ’40 Under 40′ list, these two more youngsters also made a place 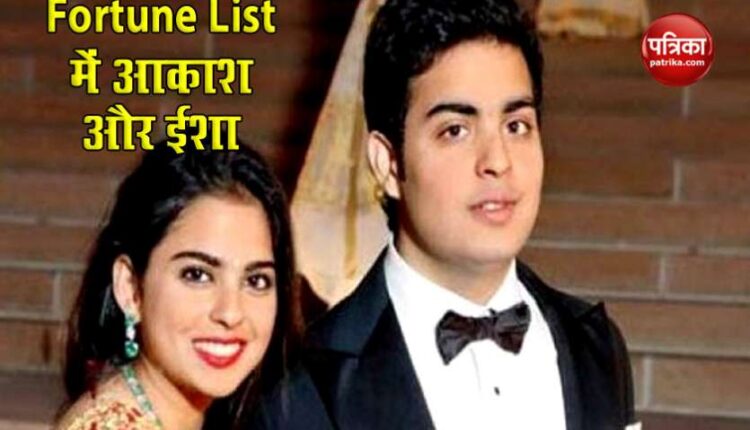 new Delhi. After Mukesh Ambani, now the names of his children have also started appearing in the list of International magazine. Isha Ambani’s name has also come before, but Akash Ambani’s name has been seen in a list for the first time. Both Isha and Akash Ambani (Fortune 40 Under 40 List) have been recorded in Fortune’s 40 Under 40 list. A total of four Indians are included in this list. The third name includes Ravindran, the founder of Byzus and the managing director of Xiaomi India. Let me tell you that Fortune has released the list of 40 top businessmen of the world within 40 years in the categories of Finance, Technology, Healthcare, Politics and Media and Entertainment. Isha and Akash Ambani are named in the Tech category.

Important role in launching geomart
According to Fortune, Isha and Akash Ambani have played an important role in taking Jio forward. Launched Geomart in May, posing a big challenge to Flipkart, the world’s largest ecommerce company and Bharti’s largest ecommerce company. According to the magazine, the two together helped to finalize the deal with several tech companies of the world, and made Reliance debt free, with several tech companies of the world.

Also read: Diesel became cheaper for the first time in the era of Corona virus, know how much the price has become

What did the buoys founder say
On the other hand, Fortune magazine also praised Byjus founder Ravindran. Fortune said of him that he told the world that it is not difficult to build a successful online education company. Fortune has said that they should now expand their business to countries like USA and UK. On the other hand, before Manu Jain joined Xiaomi, he founded the e-commerce company Jabong, which was sold to Flipkart.

Saif Ali Khan will play the role of the dreaded villain ‘Lankesh’ in ‘Adipurush’, will face ‘Bahubali’