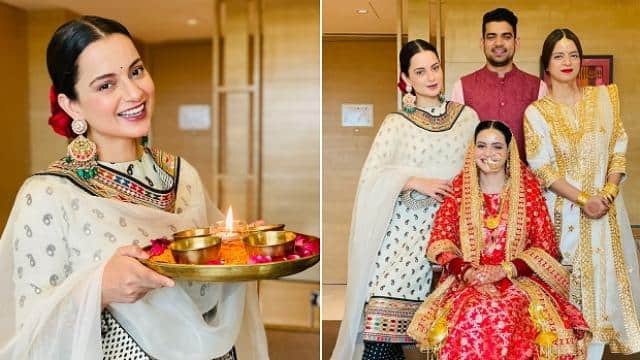 Kangana Ranaut has congratulated the fans on Diwali. Along with this, Kangana has also welcomed her sister-in-law. Let us know that recently Kangana’s brother got married in Udaipur. After marriage, Kangana has now welcomed her sister-in-law to the house. Kangana while sharing photos wrote, Mahalaxmi comes home on the day of Diwali, Goddess is also coming to our house. Today our sister-in-law is coming to her house for the first time, this ritual is called grihapravesh. Happy Diwali to all.

Kangana and all the members of the house are seen in traditional outfits. Kangana’s sister-in-law is sitting in a red couple.

On Diwali, Mahalaxmi comes home, Goddess is also coming to our house, today our sister-in-law is coming to her house for the first time, this ceremony is called Andrera (grihapravesh), Happy Diwali to all # HappyDiwali2020 # Deepawali pic.twitter.com/SOFbPLxauZ

Kangana Ranaut took full responsibility for her brother’s wedding and for this she has spent crores of rupees. Kangana’s sister Rangoli has informed about this. Rangoli wrote, I know many superstars who get their wedding done at such royal destination. But I do not know anyone who has done this for his brother / sister as Kangana has done. Kangana not only spent crores of rupees but also worked continuously on every small detail for 1 year. Kangana has a lot to offer but sadly, people focus only on her sharp and fearless side. Getting mixed up with people around him, his sweet nature is his biggest strength … I am feeling emotional, I am feeling very emotional.

Please tell that Kangana wore a Gujarati Bandhani lehenga in her brother’s wedding which took 14 months to make. The actress herself has given her information on social media.

Kangana wrote while sharing the video, all those who were asking about my lehenga. It is a Gujarati Bandhani lehenga which has taken nearly 14 months to prepare. Tremendous art is seen in this lehenga. Designer Anuradha Vakil made this dream come true and my friend Sabyasachi designed jewelery for me.

Happy Diwali 2020: From Amitabh Bachchan to Manoj Bajpayee, these celebs congratulated the fans on Diwali