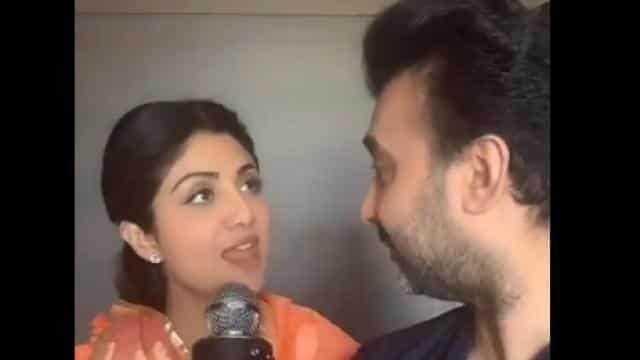 Shilpa Shetty and Raj Kundra are not letting themselves and the fans get bored in this lockdown. Shilpa, along with husband Raj, keeps making videos on Tick Talk daily. Fans also like videos of both. In most videos, both of them pull each other’s legs. Now in the recent video of both of them, you will see that Shilpa is standing behind Raj.

Raj says, ‘Friends, today I am presenting a very pure singer among you. Which song will you sing? ‘

So says Shilpa, Lag ja hug. After which Raj says, ‘All that later, what song will you sing?’ After which Shilpa says, ‘Kaminey yeh hai hi hai’.

There is a lot of fun chemistry between Shilpa and Raj which is also seen in their videos. Both are enjoying each other in lockdown.

Recently, on the occasion of Mother’s Day, Shilpa talked about her daughter Samisha and son Vian. Shilpa said, ‘My son Vian had many friends who had siblings and he used to miss it a lot. He is a very social child and he used to get very depressed when there are no children in the building. He kept asking me and Raj why he did not have any siblings. He always wanted a sister for himself. We have been going to Shirdi once a year for the last 3 years. Vian always prayed that she needed a sister soon. He was very happy when he found out that we had a daughter. Vian has praised for Sameesha for 3 years.

Fan spoke to Varun Dhawan about his baby plan with girlfriend Natasha, know what the actor said

Shilpa said, ‘I and Raj have been trying for a long time, but I had a lot of complexities. I thought of adopting the child, but that too could not happen. There was only one option left, and then finally we got Samisha.

‘Crime Patrol’ actor Shafiq Ansari died at the age of 52, suffering from cancer