Mandira Bedi reacted to the adoption of her daughter, said in the video call she used to ask, when are you coming to pick me up? 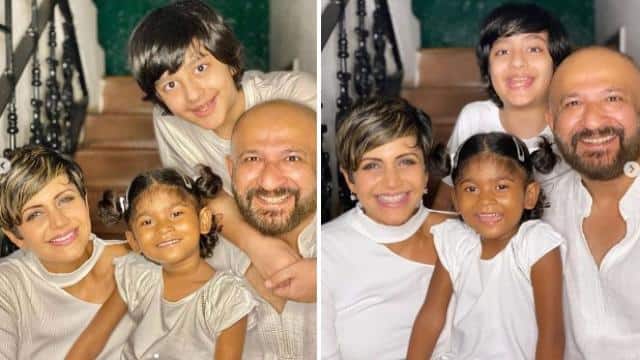 Bollywood actress Mandira Bedi has adopted a daughter. He shared this information on social media and gave it to the fans. The actress and her husband Raj Kaushal have adopted the daughter from a place near Jabalpur. He is currently undergoing home schooling to the daughter as schools are closed due to the epidemic. In an interview, Mandira Bedi has spoken openly about the adoption of daughter Tara.

Mandira says that we have done all the things through video calls. Talking to ETimes, Mandira Bedi says, “We made some video calls before meeting the daughter. She used to ask us when are you coming to pick me up? Tara is very happy with us and she is settled. She is funny, funny and does not bother us. Raj first went to Jabalpur, my son and Veer took a private jet the next day and arrived there. By the time we got there, Raj had completed all the formalities. Arrived at the airport and came back to Mumbai. “

Mandira further says that I always wanted to adopt a daughter. My nine-year-old son Veer now has a younger sister. Tara calls him ‘Veeru Bhaiya’. Veer is giving them love like a little sister and plays with them. When we brought Tara, in the online classes the next day, Veer asked his teacher if I could introduce you to my sister? Hearing this, all the students were excited and started to question. We told them that the daughter does not know English yet, only the Jabalpur dialect comes.

Gauri Khan reacted to daughter Suhana’s ‘Skin Color’ post, said- I am proud of her

Let me tell you that Mandira Bedi shared a photo of the family, in which all were seen in white outfits. He wrote, “It has come to us like a blessing, our little daughter, Tara. A little over four years, whose eyes shine like stars. Veer’s sister. Welcome to the house with you all. Spread the arms and give them love. Lucky, blessed and thank you. Tara Bedi Kaushal became part of our family on 28 July 2020. ”

Kangana Ranaut targeted many celebs including Saadha Kareena, Sonam Kapoor, and said – why are their faces stitched for Nikita?