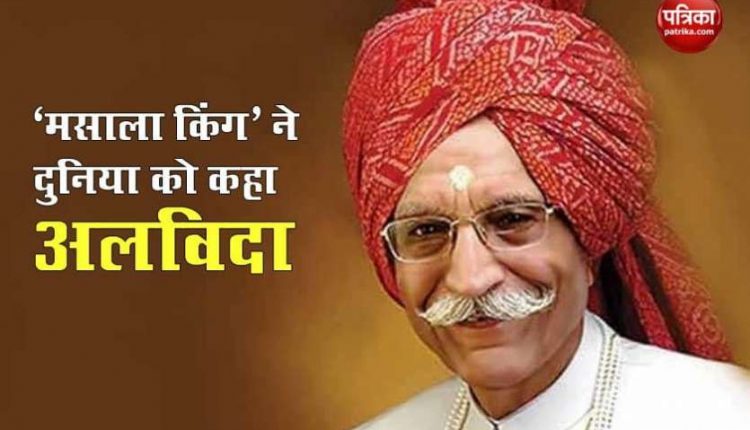 new Delhi. Who does not know well the owner of MDH Group, Mahasam Dharampal Gulati, who enhances the taste of food with its spices. Spices made by Dharampal, who adorns glasses in his eyes and turban on his head, have become the lifeblood of Indian homes. The man who soon started selling spices with a small kiosk in Delhi, became the Masala King. His hard work and dedication helped the company achieve many heights. Today the same spice emperor said goodbye to the world. At the age of 98, he breathed his last at around 5.38 am. He died due to heart attack.

It may be known that Dharampal Gulati had become corona some time ago. Though he recovered later, he was a bit unwell due to his growing age. So he died today due to a heart attack. His body will be taken from Janakpuri to Vasant Vihar home. This is where his close and acquaintances will give him a final farewell. Today we will tell you some interesting things related to his journey.

Dharampal has studied till just 5th
Masala Emperor Mahashay Dharampal Galati is a popular name of the country today, but do you know he has studied only till 5th standard. Actually, Dharmapala, born in Sialkot (now in Pakistan) on 27 March 1923, was not much interested in education. He left school before the end of 5th grade. After this he started working together with his father. He traded soap, carpenter, cloth, hardware, rice. He later worked in his father’s shop named ‘Maheshiyan di Hatti’.

Tanga used to live
Monsieur Dharampal Gulati wanted to do something different from the beginning. Due to this, he came to Delhi. But the biggest challenge for him was to earn and live here. Since he had only 1500 rupees left from his father in his pocket. In such a situation, he bought a horse and a tanga for 650 rupees and started running at its railway station in Delhi. Through this, they used to live their livelihood in the initial phase.

Foundation laid by small kiosks
While living in Delhi and taking care of his own expenses, Dharampal used to run a tanga, but his heart did not support him for this work. Therefore, he gave the tanga to his brother and set up a small kiosk on the Ajmal Khan road of Karol Bagh itself. They used to sell spices in it. His identity came from Sialkot’s Dengi chilli. People loved the taste of it. Gradually, his business started running and by the late 60s, his business started as Mahashian Di Hatti, had become a famous spice shop in Delhi.

Family built a brand together
Dharmapala was joined by his family members to transform the shop located in Karol Bagh in Delhi into a larger platform. He invested a small capital and bought shops in different areas of Delhi. Also, in 1959, the Gulati family set up their first factory to manufacture spices in Delhi’s Kirti Nagar. From here, MDH became a well-known name of the spice industry.