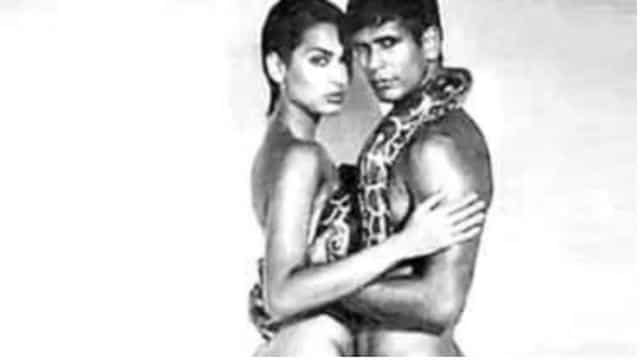 Bollywood actor and model Milind Soman is known not only for acting but also for his fitness. Even at the age of 54, he kept himself fit. He often shares his workout videos on social media. But this time, he has not shared the workout videos or photos but modeling phase.

This photo is about 25 years old. A female model is also seen with her in nude body photoshoot. He has a cobra wrapped around his neck and chest. While sharing the photo, Milind writes that often this photo appears on my timeline. It is 25 years old. At that time there was probably nothing like social media or the Internet. I think that if this photo was taken in today’s time, then how would the reaction of people be seeing it.

Keep seeing this pop up on my timelines every once in a while 🙂 its 25 years old, no social media no internet either I think! wonder what the reaction would have been if it had been released today 😋 pic.twitter.com/uOvPAGCm6q

Milind Soman was recently seen in the web series Four More Shots Please. Let me tell you that recently Milind and Ankita had celebrated the second anniversary of their marriage. However, due to the lockdown, both of them celebrated at home. Both were about to go on an international vacation, but due to the ongoing situation, both got canceled.

A few days ago Milind shared a video of his mother and wife, which was well liked on social media. In this video, his 81-year-old mother was competing with her daughter-in-law in a langi leg. While sharing the video, Milind wrote, ’28 and 81 be fit in every age’.

This photo of little Trishala Dutt is going viral with Shahrukh Khan, see