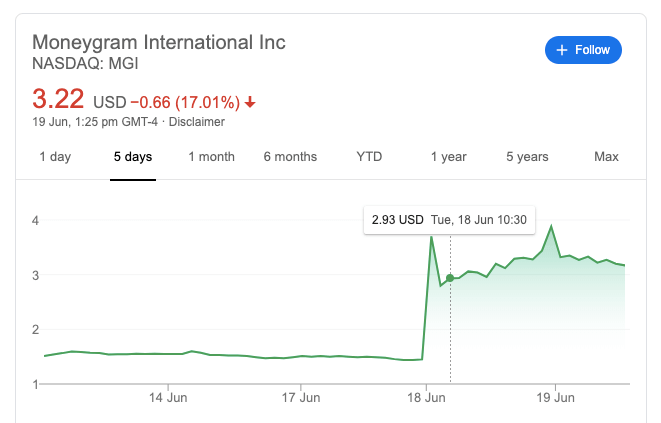 An alliance between the blockchain technology based cryptocurrency company Ripple and MoneyGram International was announced on Tuesday. Ripple invested $30 million and has also provided the option for another $20 million cash infusion in the coming two years. MoneyGram will be using Ripple’s XRP, technology in handling the cross-border transfers of digital funds for a minimum of two years under this alliance.

The CEO of the Ripple Brad Garlinghouse said, “This will eliminate the need to deploy foreign bank accounts. That’s why MoneyGram has negative working capital. It will help customers and also smooth out their treasury operations,”

However, with the announcement, the trading prices of MoneyGram stock have increased considerably. It increased upto 155%. On Monday, MoneyGram stock value was $1.49 and on Tuesday the stock price closed at $3.88. Ripple purchased the newly-issued common stock (including the shares underlying the warrant) from MoneyGram at $4.10per share, which represents a significant premium to MoneyGram’s current market price.
 
Ripple believes that its blockchain technology can make the transfer of currency in much faster and at a cheaper rate than the current technology that is being used. In the announcement, it has said that the average traditional transfers take up to an hour and cost around $30. However, its xRapid product can handle all the transactions in just two to three minutes and cost in a few pennies.

MoneyGram has said, the alliance with Ripple will help in “settle key currencies and match the timing of funding with its settlement requirements, reducing operating costs, working capital needs and improving earnings and free cash flow.”

Larry Angelilli, the Chief Financial Officer, has said, “We are very pleased with the terms of the Ripple investment which supports the Company with permanent capital and additional liquidity,” and has also added, “This partnership also provides MoneyGram with the opportunity to improve operating efficiencies and increase earnings and free cash flow.”