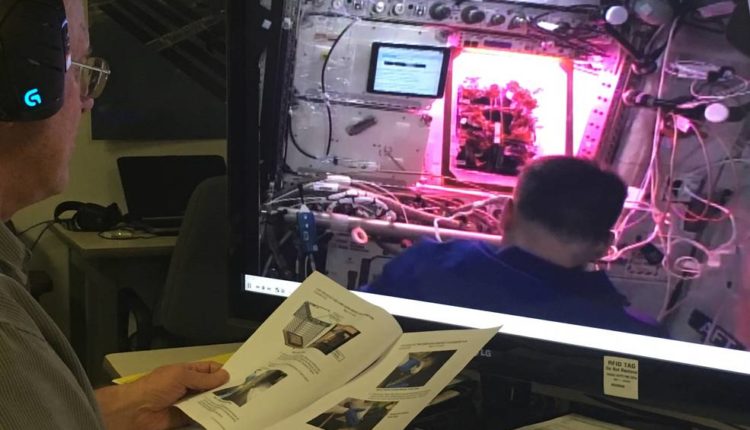 0
Share
NASA strikes a milestone in space biology. An experiment was conducted to exhibit how NASA applies science across disciplines.
As part of the Veg-03 experiment, six lettuce plants were planted abroad the International Space Station on October 25. The result has been remarkable as the lettuce plants have grown concurrently. The experiment was initiated by the NASA astronaut Shane Kimbrough under the guidance of on the ground gardeners at Kennedy Space Center.
Kimbrough tasted the “Outredgeous” Red Romaine lettuce leaves. The motive behind plantation is to escalate the on-orbit harvest and provide astronauts fresh and nutritious diets. The experiment on-orbit was done after testing it on the ground.
Elaborating about the experiment, Veggie Project Manager Nicole Dufour said, “During their first week of life, the small seedlings were getting too much water. This put the plants’ growth a bit behind schedule, but they recovered nicely after we instructed Kimbrough to use a fan to dry up some of the moisture.”
The technique used for cultivation of crops in space is Cut-and-come-again. As the name suggests, the procedure involves a harvest of selected leaves, while the others are left intact. The plants will continue to grow and produce more leaves for harvest in every ten days approximately. “A repetitive harvest allows us to provide more food for both the crew and science, so it’s a win-win. We are looking forward to hearing how Shane enjoys his first harvest,” said Dufour.
The crew members mounted a plaque near the chamber which read, “Dedicated to the memory of space biology pioneers Thora Halstead and Ken Souza, for all they did to plant and nurture the seeds of biological research in space.”
NASASpace
0
Share