On Kangana Ranaut’s nepotism comment, Saif Ali Khan said – I have no idea what she is going to say, I was surprised 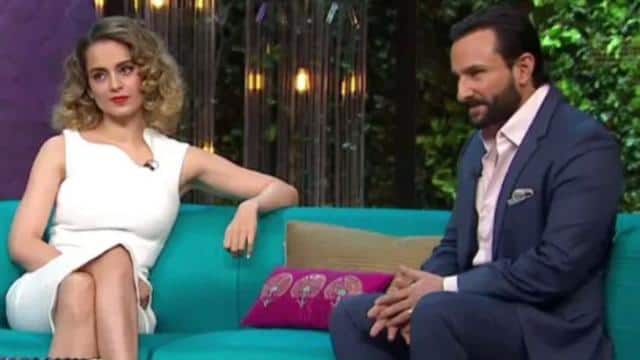 It was early 2017 when Kangana Ranaut came on Karan Johar’s chat show. She came with Saif Ali Khan to promote her upcoming film ‘Rangoon’. During this, Kangana had commented on Karan Johar’s show about nepotism and Bollywood mafia. Since then, there has been a debate on nepotism in the Hindi film industry. This hot topic remains on social media.

Talking to the New Indian Express about Saif Ali Khan, he said that I had no idea what Kangana Ranaut was going to say there. I was shocked when Kangana Ranaut made such a comment on Coffee with Karan’s chat show. I felt that if you have come on the show and you have an agenda, in which you have come thinking that you have to let the host down, my mind does not work like this. Neither do I understand. So I felt quite shocked. But I have nothing to do with these things. I was just finding myself between the two at that time, Saif said with a laugh. Yes, maybe I would have thought about it a few times. Does not comment like this.

Saif Ali Khan’s statement on the war of nepotism in Bollywood, said- I myself have fallen victim to it

Abhishek Bachchan is making a digital debut with Breath 2, Amitabh Bachchan reacted to this

Producer Nikhil Dwivedi targeted the Bollywood industry
Producer Nikhil Dwivedi has expressed anger at Bollywood celebs. Nikhil tweeted, Sometimes the pretense of our film industry makes me ashamed. Everyone is saying that he should have been in touch with Sushant, but the truth is that you guys were not in touch with Sushant as his career was downhill. Are you currently in touch with Imran Khan, Abhay Deol and others? No. But you were when these people were doing well.

Abhishek Bachchan is making a digital debut with Breath 2, Amitabh Bachchan reacted to this