Saif Ali Khan congratulated the fans with the team of ‘Bhoot Police’ on Diwali, Taimur said in the middle of the video- Abba, come here! 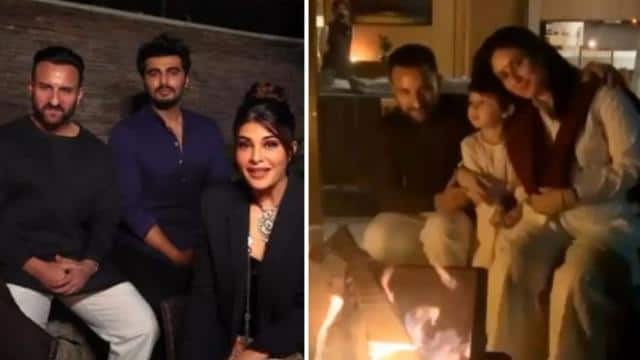 Bollywood actors Saif Ali Khan, Arjun Kapoor, Jacqueline Fernandes and Yami Gautam are currently in Dharmashala, Himachal Pradesh. All of them are busy shooting for the film ‘Bhoot Police’. Recently, the entire team made a video for the fans, wishing for Diwali. The voice of Timur was special in this video.

Actually, the team of ‘Bhoot Police’ is congratulating the fans on Diwali. In the meantime, Timur says to Saif Ali Khan, “Abba, come here.” Saif replies, “Yes, a second”. Although Timur is not seen in the video, he can definitely be heard calling Abba in the middle. Sharing this video, Arjun Kapoor wrote, “Happy Diwali to all”.

Please tell that Kareena Kapoor Khan, Taimur Ali Khan, Malaika Arora are all in Dharmashala. This time Diwali has been celebrated by everyone together in Himachal Pradesh. Recently, Kareena shared a boomerang video, in which Saif, Kareena and Taimur were seen sitting near the bonfire. At the same time, Malaika also shared many photos from the Diwali party.

Malaika Arora is the judge of the reality show India’s Best Dancer. She has reached Dharamshala after completing the shooting of the show in Mumbai.

Fan lit up lamps outside Sushant’s house, actor’s sister said – will raise her voice till justice is done