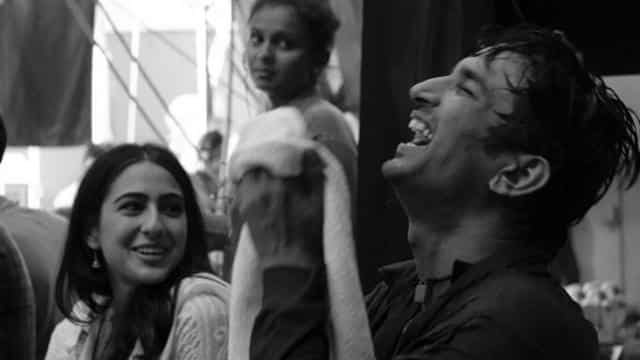 Bollywood actress Sara Ali Khan has shared an old photo from the set of the film ‘Kedarnath’ while paying tribute to Sushant Singh Rajput. The romantic chemistry of the two looked quite beautiful in this film. The actress is shocked by Sushant’s suicide. Sharing this black and white candid photo, Sara Ali Khan writes, ‘Sushant Singh Rajput’. She also makes emoji with a broken heart.

Let us tell you that post-mortem of Sushant Singh Rajput’s body is going on. Things will be clear once the report arrives. News is coming that Sushant Singh Rajput will be cremated tomorrow i.e. on Monday. At this time, his father and family are waiting to come to Mumbai. Sushant’s funeral will be attended by only close people due to the Corona virus. Recently, Sushant’s sister and friend have reached Cooper Hospital in Mumbai.

Police investigating the suicide case were quoted as saying that they had made the last call to a friend, but their friend had not picked up the phone. However, the police did not reveal at what time Sushant called the friend.

In a statement released after the actor’s suicide, it is said that we are having a lot of trouble to tell that Sushant is no longer in our midst. We ask his fans to keep Sushant Singh Rajput and his work in his thoughts.

Many Bollywood actor-actresses have said goodbye to the world during the lockdown. Irrfan Khan died at the end of April before Sushant Singh Rajput’s suicide. The next day Rishi Kapoor also died due to cancer.

Sapna Bhavnani spoke on the death of Sushant Singh Rajput, no one is friends in the film industry

Family members wanted to marry Sushant in November, told elder mother – will take everyone to Badridham