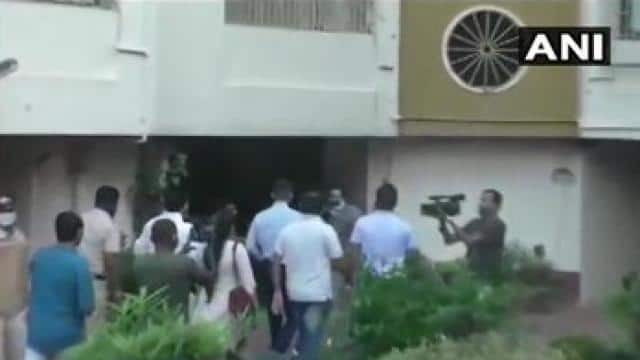 In the Sushant Singh Rajput case, the Narcotics Control Bureau (NCB) team investigating the drugs angle has raided Riya Chakraborty’s house this morning. In the Sushant Singh case, on Friday morning, the NCB team reached the house of Riya Chakraborty and Samuel Miranda, where the search operation is still on. An NCB official said that under the NPDS Act, searches were also being carried out at the homes of Rhea’s brother Shouvik Chakraborty and Samuel Miranda.

NCB has reached Riya’s house on such an occasion, when Riya and her brother Shouvik Chakraborty’s new WhatsApp chat has leaked. In Riya’s chat, conversation about MDMA and drugs named Maruana is seen. According to media reports, Riya Chakraborty tells her brother to buy ‘Buds’ for someone. This chat is on 15 March 2020. Riya writes to Shouvik Chakraborty in a message that he blows 4 a day, so plan in the same way. In reply, Shouvik writes if he wants Bud.

Actually, the NCB team has so far arrested five people in drugs connection. In addition, two of the accused drug suppliers arrested by NCB, Abdul Basit Parihar and Zaid Vilatra, have a direct connection to Riya’s brother Shovik. It is believed that Shawwick may be questioned if evidence is found in the raid.

Earlier, Indrajeet Chakraborty, father of actress Riya, accused in the case, was questioned by the CBI for the third consecutive day on Thursday. Indrajit appeared before investigators at the DRDO guest house in Santacruz, Mumbai at 10:30 am, the same CBI team is staying in this guest house.

On Wednesday, the Narcotics Control Bureau (NCB) said that it has arrested two alleged drug traffickers in connection with the aspect related to drug trafficking in the case of Rajput’s death. Officials said the agency is investigating Riya Chakraborty’s brother and his alleged links with those arrested by the NCB.

Amazon can invest big in Vodafone Idea together with this company