Sushant Singh Suicide: Karan Johar, who is constantly being trolled for nepotism, took a big step 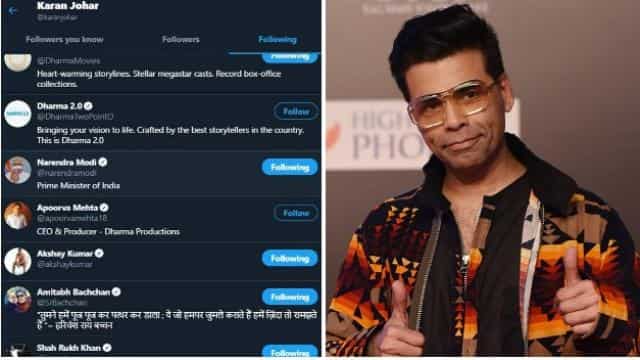 The controversy has started in Bollywood after the suicide of Bollywood actor Sushant Singh Rajput. The fire of the anger of Sushant’s fans is constantly erupting and now this fire has started catching many big names. At the same time, after the actor’s suicide, people have started raising their voices once again through social media. In this campaign, Bollywood stars have started Boycott. In this case, Karan Johar is targeting people on social media. Most users are blaming Karan Johar for the nepotism present in Bollywood. Karan had kept a firm eye on the matter for the time being, although he has unfollowed Star Kids and the rest of the star through his Twitter account. He has unfollowed thousands of people on his Twitter account.

Looking at Karan’s Twitter account, it seems that he is following only 8 people on social media. Four of these accounts are related to his Dharma Productions and his CEO Apoorva Mehta, while in the remaining four, he is following only 4 celebrities. These include the accounts of Amitabh Bachchan, Akshay Kumar, Shah Rukh Khan and Prime Minister Narendra Modi. Karan’s unfollowed list has many Bollywood celebrities. However, Karan’s decision is visible only on Twitter. No such response has yet been seen on his Facebook and Instagram.

Let us tell you that a lawyer named Sudhir Kumar Ojha has filed a case in court against 8 people including Ekta Kapoor, Salman Khan, Karan Johar, Sanjay Leela Bhansali in Muzaffarpur, Bihar, for the death of Sushant Singh Rajput. While the real reason behind Sushant’s death has not been revealed, it is being speculated that Sushant was upset for a long time due to the ban by Bollywood producers. A court case has been registered against all of them.

Question raised on Kangana Ranaut’s video on the death of Sushant Singh Rajput, then his team gave a befitting reply