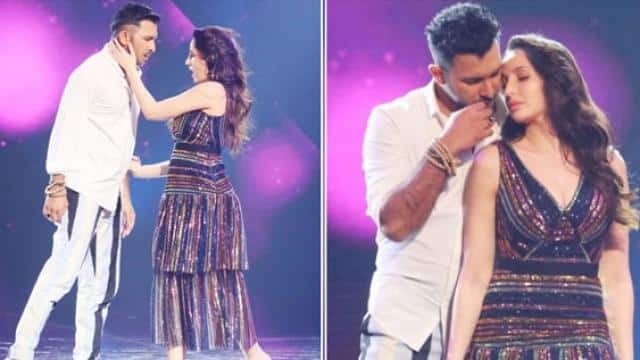 Nora Fatehi recently reached the India’s Best Dancer Show for the promotion of her song Nach Meri Rani. During this time, Terence Lewis gave a romantic performance with Nora. He performed in the song Pyaar Pyaar Pyaar Hai with Nora. Nora looked very shy during this time. At the same time, Geeta Kapoor was seen enjoying the performance of both. This video of Nora and Terence is becoming quite viral on social media.

Fans are enjoying the chemistry of both. During this, Nora appeared in a white color outfit in which she looks very glamorous.

Let me tell you that a few days ago a fake video of Nora and Terence went viral showing that Terence touch Nora the wrong way. Terence said in an interview about this video, ‘Why would I do this? Thankfully, I have received enough love and attention from my female colleague who has worked with me throughout my life. I respect Nora Fatehi very much. Only 17-year-old can do this kind of thing and I am 45 years old. ‘

The choreographer told the story behind that video, saying, “All the judges were giving a standing ovation to Shatrughan Sinha as he came as a special guest in India’s Best Dancer.” There were 4 cameras around at that time. Why would I do this when I know that there are so many cameras here and you think that Nora and I will be expressionless after this kind of talk. Any woman will react to it immediately. She is very good and removed it immediately on social media. ‘

Nora wrote on social media, ‘Thank you Terence! In today’s era where video is being morphed on social media and Photoshop effects are used for memes. I’m glad you didn’t let yourself get upset. This time will also pass. ‘

Nora further wrote, ‘You and Geeta Maam have given me a lot of respect and accepted me as a judge on the show. It was a lovely and learnable experience for me.