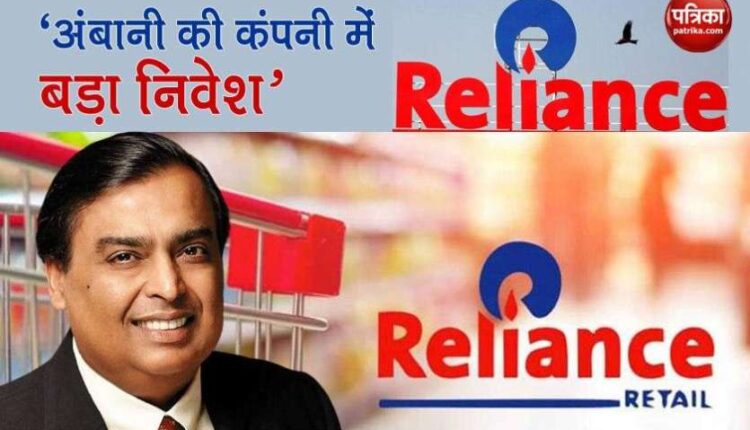 The company said that GIC would invest ₹ 5,512 crore for a 1.22 percent stake, while TPG Capital Management would invest 1,838 crore with a 0.41 percent equity stake in the retail sector. Reliance Industries said that the company gets a pre-money equity value of 4.285 lakh crore ($ 58.47 billion) from investment in Reliance Retail. This is TPG Capital’s second investment in Reliance. In June, the firm invested $ 598 million in Reliance’s digital arm Jio Platforms. According to a news agency, in September, Reliance Retail Industries has approached investors in the Jio platform. Reliance Industries, already India’s largest retailer, is acquiring Future Group’s retail business in August with a deal of around $ 12,000, a $ 3.38 billion deal. Let me tell you here that in the last four days, five big investments have come in the company.

Significantly, Reliance Group is also expanding its so-called new commerce venture, which is the flagship of Walmart Inc.’s Flipkart and Amazon.com Inc.’s Indian arm, for online delivery of groceries, apparel and electronics. Connects neighborhood stores. Reliance Industries Chairman Mukesh Ambani has expressed happiness over both investments. He said that there is a need to change the eco system of the retail sector in the country. Therefore, GIC and TPG Capital will be very helpful in this matter. He said that I appreciate GIC’s excellent track record of investing in business.

Gauhar Khan wore a stylish dress for the Bigg Boss 14 premiere, fans began to demand his golden and white jacket