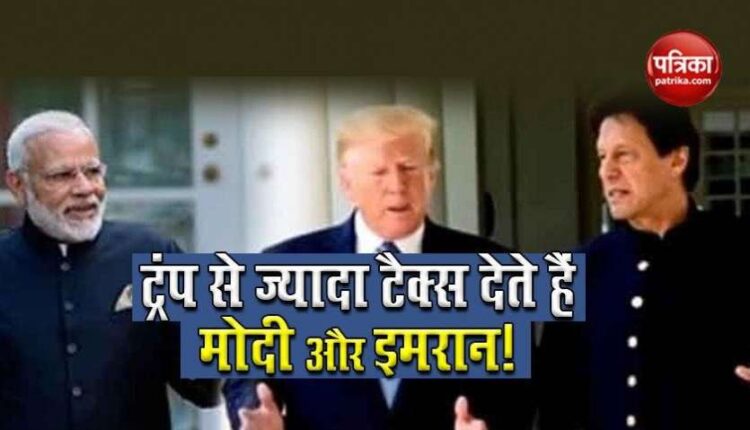 new Delhi. The difficulties of US President Donald Trump are increasing. According to the report of the US media, after becoming President, Donald Trump made only $ 750 i.e. 55 thousand rupees tax in America which is half as compared to Imran Khan. In the same year, Pakistan’s Prime Minister Imran Khan had filed tax of more than one lakh rupees. At the same time, Prime Minister of India Narendra Modi had also declared taxable income of Rs 19.92 lakh for the fiscal year 2017-18 in the election affidavit of 2019. Surprisingly, US President Donald Trump is much richer than both Imran Khan and Narendra Modi. His name is among the successful industrialists of America.

Also read: Businesses are changing their business model to suit self-reliant India, know what are the changes needed

Imran had paid double income tax
Talking about Imran, according to a report of Pakistani media, Imran had collected an income tax of Rs 103,763 in 2017, which is about 50 thousand rupees less than in 2016 and about twice the US President’s 750 dollars i.e. 55 thousand rupees. According to Pakistani media report, he has collected tax of about 47 lakh rupees from 1981 to 2017. Meanwhile, in 2010, he had deposited an income tax of Rs 18.83 lakh. Let me tell you that Imran Khan’s family is in the most famous and wealthy family in Pakistan. Currently, Imran is also the Prime Minister of Pakistan.

Also read: Continued relief in diesel prices, know how much happened on the fourth day

The chief servant of India had told so much taxable income
The Prime Minister of India belongs to a fairly ordinary family compared to Narendra Modi’s Donald Trump and Imran. If we talk about his tax, then in the election of 2019, he had declared taxable income of Rs 19,92,520 in the fiscal year 2017-18 in his affidavit. There is no information about how much tax the PM has collected in this affidavit. When we draw tax through a CA based on their taxable income, it becomes Rs 4,07,756. According to the CA, if Narendra Modi had not been the Prime Minister of India, he would have had to deposit tax of Rs 4 lakh according to his taxable income, but he donated his salary and got many allowances and exemptions, then his tax from it May be reduced. Suppose PM Modi pays so much tax, then 8 times more than the American President.

How rich are Imran and Modi
It is no secret that Donald Trump is one of the richest political leaders in the world. If we talk about the government salary, then they have 4 lakh dollars annually. Out of which he donates one dollar to himself and the rest to salary. His total net worth as of July 9 is 2.1 billion as reported by Forbes. According to Pakistani media, Prime Minister Imran Khan’s salary is Rs 2 lakh gross. Tax and other deductions are Rs 1.96 lakhs. His total assets are 50 million dollars. Talking about Narendra Modi, according to the affidavit of 2019, he has a total assets of Rs 2.50 crore. While his salary per month is 1.60 lakhs i.e. 20 lakhs rupees annually.