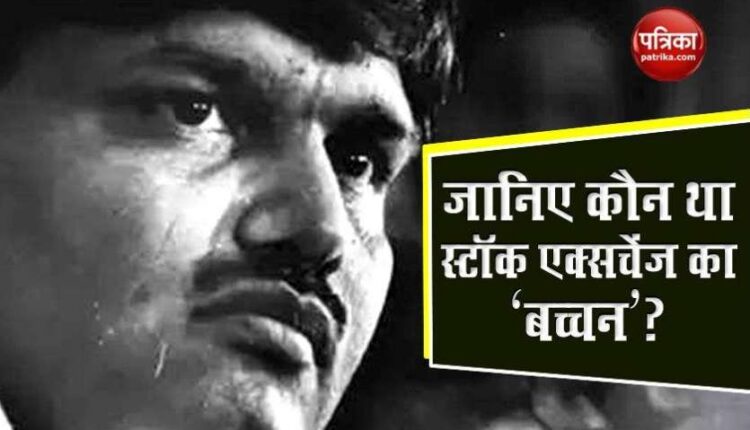 new Delhi. At present, there are many big names which are called Big Bull of the stock market. At the behest of which, there is a turmoil in the share market. But the ‘Bachchan’ of this market has been the same. There was neither like that nor will it happen. We are saying that it is better if there is no one like it in the market. Yes, the country’s first financial scam, which was worth about 4 thousand crores, was done by Harshad Mehta. Which changed the entire map of the Indian stock market. Today, on that real time villain, the hero of Bollywood is playing the character. The 1992 scam web series trailer launched 24 hours ago. The series was based on Harshad Mehta. At the same time, a film called ‘Big Bull’ is also coming in the next few months. Which is being told by Harshad Mehta as Inspire. Whose main character is playing Abhishek Bachchan. Let us also tell you about this real time villain who once used to be a child of ordinary investors.

Also read: The biggest relief to the government in the month of September, GST collection of Rs 95,480 crore

The journey from salesman to stockbroker
Harshad Mehta was born on 29 July 1954 in a businessman family in Panel Moti, Rajkot, Gujarat. Harshad, who came to Mumbai in Bachpan, started his studies at Holy Cross Beron Bazar Secondary School in Mumbai and ended up with B.Com from Lajpat Rai College. After which he made his first job as a salesman in New India Assurance Company Limited. After which his mind turned towards the stock market. Without killing his mind, he joined a broker in Harijivan Das Nemidas Securities brokerage firm. After that, he learned all the tricks of the stock market by making Prasirjivan Das his master. In 1984, he opened his own company called Grow More Researchers and Asset Management and also got Broker Membership at BSE. After which Harshad became a bachchan on seeing the market.

When the market dances at Harshad’s fingers
Harshad Mehta’s business went on and in the 1990s, Harshad’s company added big investor names. Harshad came to the headlines for the first time when he started investing money in ACC i.e. Associated Cement Company. After which Harshad Mehta reached the sky from the ground. The ACC’s share of 200 rupees had reached 9000 rupees. After that Harshad started appearing on the business page and front page of every major newspapers. Harshad Mehta’s 1550 square feet of facing paint houses and expensive expensive cars made him a celebrity not only in the city of Mumbai but also in the entire country. People saw for the first time that a small broker was playing crores of rupees in no time. Perhaps this was the question that bedeviled Harshad Mehta’s success and transformed it from good days to bad days. The biggest question was, where is the money coming from?

Also read: Know how much diesel has become cheaper on October 2, how much will have to be paid on petrol

This is how the big scam was revealed?
The biggest scam by Harshad Mehta was revealed in 1992. According to the information, Harshad Mehta would take a 15-day loan from the bank and put it in the market and returned it with interest within 15 days. No bank gives a 15-day loan, so he used to take a loan for one day. Mehta gets a fake BR from one bank and on whose behalf he gets a loan from another bank comfortably. After the disclosure, the banks stopped lending to him and started asking for his money back. During that time, 72 criminal charges were levied and all the civil cases were filed.

Then the game of looting money from common people started
Harshad did not stop even after the case was filed. He started a new game of making profits and making money. He started writing advisory columns in newspapers. In which common people were advised to invest in which company and not in which company. Those columns used to write the names of the companies investing in them, in which Harshad’s rupees are included. Due to which, crores of rupees of common people were drowned. Surprisingly, he also accused the then Prime Minister PV Narasimha Rao of bribing one crore rupees in the name of getting rid of all cases. Which the Congress completely rejected.

Convicted and mysterious death in just one case
As told to you, he was facing more than 70 cases, but he was found guilty in only one case in court. For which he was sentenced to 5 years in the Supreme Court and a fine of Rs 25,000. He was imprisoned in prison for serving the term of punishment. Chest pain occurred late night on 31 December 2001. He was admitted to Thane Civil Hospital and died. His death became a shock. Even today, the name Gahe Bahaga Mehta comes in the headlines because it was such a real life villain, which shook the entire country.

Ileana shared the post about her body, said- I used to worry that I am not beautiful