Without help, people walked for hours before reaching the station 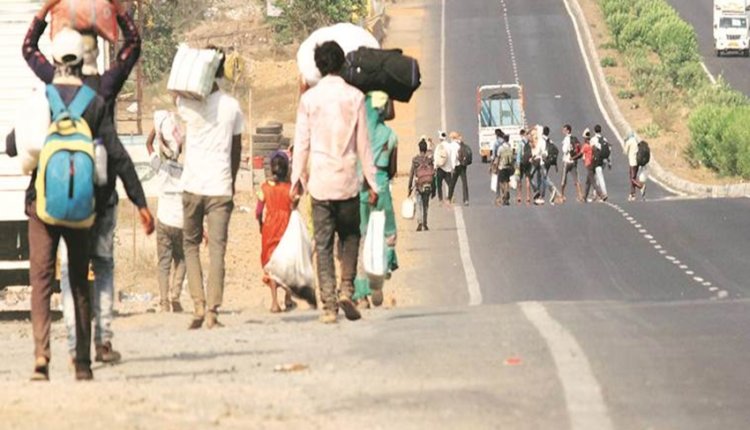 The news of train running has increased the number of migrant laborers on the roads. In the desire to get a four o’clock evening train, if someone has left the house at six in the morning, and at nine o’clock, that too by auto. Near the Kashmiri Gate bus base, similar people were seen trying to reach the railway station with their luggage in some way so that the bus could now reach home.

6 young migrant laborers were seen going to the station near the Hanuman temple at Kashmiri Gate. One of these vishals told that they were living in Uttam Nagar in Delhi. Nobody has any work for two months. We even applied for ration but that too was not received. There was only waiting for the opening to close. Now that the train has run, everyone has decided to go home. All these people are from Lucknow. When asked about the train ticket, he told that there is no rail ticket. But it is heard that the journey will start in a day or two. Will wait till then. Otherwise all will go home on foot. There is no work here, till death is hungry. Better to reach home somehow.

Two autos changed to Kashmiri Gate, yet to reach New Delhi
Suyansh also met him at the Ring Road bus station dragging a bag and a large suitcase over his shoulder. He told that he is a student and was living in Burari. He left for the train at 4 pm. No auto bus was found all the way. Somehow two different autos arrived to reach the bus base. From now to reach New Delhi. The ticket is already done, but getting there is a big challenge. Railways have also ordered passengers to arrive 45 minutes ahead of schedule. If you get a ride from here, I will reach on time. Otherwise, try to reach on foot with luggage.

Permission sought to take migrants home
Rail services have started for the country. But on the first day, the biggest problem was due to lack of metro, bus and auto etc. Passengers in the vicinity of the station were seen going to the station by bicycle rickshaws. On migration of migrants in and around Delhi, the All India Luxury Bus Association has offered to provide bus services to the general public. Association President Shyam Lal Gola has written a letter to the Chief Ministers across the country and demanded that they allow the operation of buses.

The letter states that the association has sufficient buses and provisions can also be made in buses following the central government’s guidelines. This will also help to prevent those who are migrating from Delhi to other states of the country due to no work. Apart from this, the way of employment will be opened for the families connected with the transport sector. The association is ready to accept all the provisions of the government. At the same time, Delhi Auto Driver Association leader Rajendra Soni has written to the Home Minister saying that train services have been started for the country, in such a situation, people will need auto taxis. Therefore, taxi services should also be approved to run. At present, the financial condition of the auto drivers is bad, so an economic package should be issued for these families.

Shahid Kapoor washing dishes at home in lockdown, said- this is my department

India ranked 12th among corona infects in the world