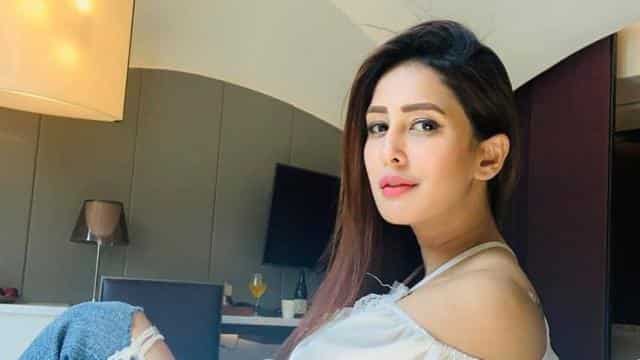 TV’s well-known actress Chahat Khanna was in the news recently due to her personal life. For the past few weeks, the actress’s name has been associated with Punjabi and Bollywood singer Micah Singh, and the couple confessed a few days ago that they both got a chance to understand each other during the lockdown. On the other hand, Chahat Khanna and Micah Singh have been in the news continuously for the past several days by sharing romantic pictures taken with each other on social media. Recently Chahat Chahat Khanna has told that he is in depression. Now after the depression, she has become a victim of cybercrime. According to the news, they are constantly getting dirty messages on social media and friend requests of many unknown people. Distressed over this, Chahat has lodged a police complaint.

Chahat Khanna told the Times of India that cybercrime has increased significantly in lockdown. Which I have also fallen victim to. According to Chahat, a few days ago she met an old friend of hers, after which the proposal of marriage started coming. People are asking them to go on a date. Not only this, a friend request has also been sent to people unaware of his account.

Manisha Koirala sleeps due to Corona, the actress asked for suggestions from people on Twitter

According to Chahat Khanna, dirty messages have also been sent from his bar social account, which he has not sent. He said, “I can’t even think about doing this. By the way, this friend of mine has not disturbed me for the first time. Due to this, a friend of mine has gone into depression earlier too. ”Chahat further said that he has lodged a complaint with the police but no action has been taken so far. I know that the police are handling big challenges right now.

Karthik asked- Should I trim the beard or not? Deepika replied

Please tell that Chahat Khanna was seen in Sanjay Dutt’s film Prasthanam. The actress played Manisha Koirala’s daughter in this film. Apart from this film, he has also worked in Chahat 7½ Phere .. More than a Wedding. Actress Chahat Khanna gained a lot of popularity with the supporting role in the show ‘Bade Achhe Lagte Hain’. After this show, this relationship is called Kya and TV show has appeared in Kabul. Chahat’s first TV show came in 2002 titled ‘Saatchi Baat Sabe Jag Jaane’. Fans also call him Half Kareena and Half Katrina.

Actress Chaht Khanna is in depression due to failed relationships

June Alameda of Scotland: First woman to tell about Corona