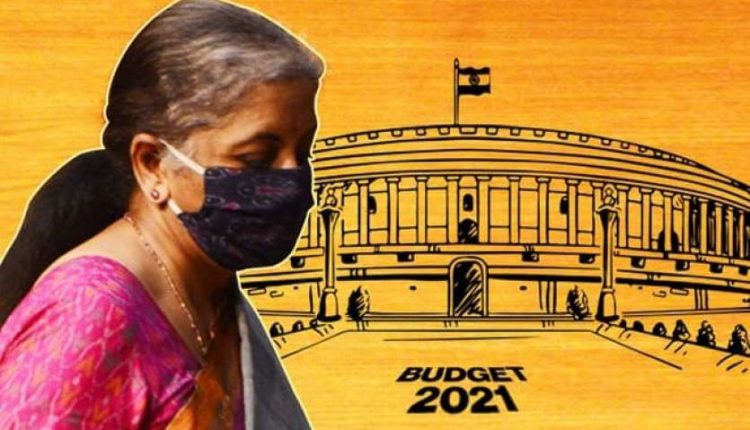 new Delhi. Finance Minister Nirmala Sitharaman has presented her third budget. Although Sitharaman has described the budget as satisfied, but this budget is more visible keeping in mind the vaccine, farmers and the upcoming assembly elections. While the government opened its entire fist for the health and agriculture sector, other people kept both their tongue and their hands closed. Among many things, the common man was demoralized by increasing cess and tax. There is no change in the tax slab that everyone was looking forward to. At the same time, tax exemption in affordable housing has been increased for one year.

At the same time, large investments have been announced in the infrastructure sector to boost the bad economy due to Corona virus epidemic. Let us tell you that the expenditure for the next financial year is estimated at 34.83 lakh crore rupees, which includes capital expenditure of 5.54 lakh crore rupees. He said the fiscal deficit for FY21 was estimated at 9.5 per cent of GDP and will come down to 6.8 per cent in FY22. Focus on health
A health budget of Rs 2,32,846 crore has been kept for the financial year 2021-22. 35 thousand crores have been allocated for the Kovid vaccine. Which can also be increased. The entire health budget has been increased by 137 percent over the previous year. The Finance Minister also announced the Self-Reliant Healthy India Scheme. He set a budget of Rs 64,180 crore for the next six years for this scheme. This budget will be separate from the National Health Mission. Under this, health facilities will be promoted from village to cities. 75 thousand rural health centers, screening centers in all districts, critical care hospital blocks in 602 districts, National Center for Disease Control, Integrated Health Info Portal will be strengthened. 17 new public health units will be commissioned. They will also be built at 32 airports. National Institution of World Health will be formed. 9 Bio Lab to be set up. Four National Institute of Virology will be formed. 
Attempt to make farmers happy
There is a special focus on farmers and agriculture in this budget. Under the Operation Green Scheme, 22 perishable vegetables will be included. 1000 more mandis will be added under the e-name. Agriculture infra fund will be available for APMC, along with a provision of 40 thousand crores has been made in the rural infra fund. Five big fishing hubs will be built in the country. In 2020-21, the government made a purchase of 75 thousand crore rupees of grain, which helped 43 lakh farmers. Paddy shopping has increased to 1 lakh 45 thousand crores. This year, this figure can reach one lakh 72 thousand crores. The government can purchase pulses of 10 thousand 500 crores this year. All states will be brought under the ownership scheme. 
Railways got a lot
A provision of one lakh 10 thousand crore rupees has been made for the railways. The budget states that the National Rail Plan 2030 has been prepared. The target of making future ready rail system is set. The Western and Eastern Freight Corridor will be ready by June 2022. Son Nagar- Gomo section will be built on PPP mode. East Coast Corridor Kharagpur-Vijayawada, Itarsi-Vijayawada Corridor will be built. The broad gauge – electrified rail line has a length of 46 thousand kilometers. By December 2023, there will be 100% electrification. LHB coaches will be given on the tourist route. A high density network will have a rail protection system made of indigenous technology.

Declaration of Economic Corridor
At the same time, it was announced to create a Development Financial Institute. Resources like Railway Dedicated Freight Corridor, NHAI’s Toll Road, Airport will be covered under Asset Monetization Management. The dedicated freight corridor will be sold after commissioning with DFCC, Operation & Maintenance. This time the capital expenditure will cost Rs 4.39 lakh crore. A provision of Rs 5.54 lakh crore has been made next year. Under Bharatmala project, 8 thousand km of contract will be given by March. This will be spent on the road corridor
One lakh 18 thousand crore rupees will be given for the road transport ministry. There were also major announcements on Road Infra and the Economic Corridor. A 3500 km long road, Madurai-Kollam Corridor being built in Tamil Nadu, 1100 km long National Highway Works in Kerala, Mumbai-Kanyakumari Corridor will cost 65 thousand crores. 6500 km of highway Bengal will cost 25 thousand crores. Which includes repair work of Kolkata-Siliguri road. Booster dose to education sector
It has been announced to build 100 new Sainik Schools under the National Education Policy. The help of private sector will be taken for the construction of these schools. Higher Education Commission will be created. For which the law will be amended. Central University will be formed in Leh. 758 Eklavya schools will be built in tribal areas of the country. 38 crores will be spent on a school. A scholarship of Rs 35 thousand crore was announced for the scheduled castes. Which will benefit 40 million students. Under the National Language Translation Mission, the government’s work will be made known to the people through translation in Indian languages. 50 thousand crore rupees will be spent on the National Research Foundation. On the other hand the margin money requirement for Scheduled Castes, Tribes has been reduced from 25% to 15%.

Government will enter the market
There were also announcements about disinvestment in the budget. It was announced to divest 2022 companies like BPCL, Bharat Earth Movers Limited. Two more government companies will be disinvested in 2021-22. LIC’s IPO was announced. There will be disinvestment of public sector companies, both strategic and non-strategic. The government will get Rs 1.75 lakh crore from disinvestment. A separate administrative system will be created for Ease of Doing Business. The Mali Hall of power companies recently announced a scheme for improvement. In Ujjwala scheme, one crore families and more were added. In addition 100 new cities will be added to City Gas Distribution. Father happy, son sad
In the issue related to ITR, relief has been given to those elders of the house, who have been of 75 years and above. It has been proposed to exempt them from filing income tax in the budget. On the other hand, for tax assessment, a 6-year-old and 10-year-old account in a serious case has to be taken out. This time limit has now been reduced from six years to three years. In Serious cases also, it will be kept for 10 years only if more than 50 lakhs has been stolen annually. In order to reduce the tax related cases, the controversy has led to the continuation of the trust scheme. There is trouble for the children of the house. There is no relief in income tax for salaried class people. This means that the government does not want to leave any means of earning. Relief in Affordable and Rental Housing
Concession was given to the general public for affordable housing which has been extended for a year. The exemption limit on loan for purchase of affordable house was increased by one year to 31 March 2022. On the other hand, a plan has been announced to provide houses for rent at affordable rates to the migrant workers.

Corporate tax reduced, dividend tax removed
This time the budget has announced a reduction in corporate tax to give relief to the corporate sector and attract foreign investment. At the same time, the dividend tax has been completely removed. A decision resolution committee has been announced for small tax payers. People with income up to 50 lakh can go to this committee and settle their cases. All matters will be handled electronically. Video conferencing will be used if needed.

Know about such countries of the world, where INCOME TAX is not to be filled