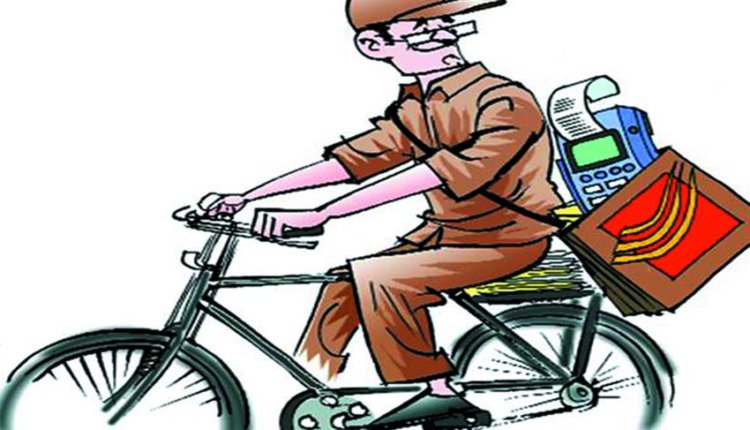 They are missing from the headlines. They cannot be found in the corroded list of Corona warriors. But his work gained recognition in this period of epidemic. In complete ban, he reached the last house of remote India with letters, parcels, pensions, money orders etc. in a khaki bag filled with joy and sorrow. Made a place in their hearts and played the sting of ‘India Post’.

These postmen not only sent letters and parcels, but also took the responsibility of transporting cash and other essential items. According to the Ministry of Communications, in April, India Post disbursed 300 million rupees in 1.5 million transactions to the doorsteps of people using the Aadhaar enabled payment system. In May, the trend is to double this figure (about 2.8 million transactions).

According to Akhilesh Pandey, Postmaster General (Operations), Delhi Zone, four lakh speedposts and registered posts were distributed in Delhi only during Purnabandhi. About 47 lakh rupees were sent to more than seven lakh people as a money order. Not only this, more than four lakh rupees were sent by the Department of Posts to the prisoners lodged in three jails of Delhi (Tihar, Mandoli and Rohini). Please tell that even in jail, inmates can send some money to their house. Pandey says that 80,000 speedposts and parcels were sent out of Delhi in Poornabandi, out of which 40 thousand bookings contained only medical items and medicines. In total, the Delhi Postal Department distributed about two and a half thousand tons of materials.

Another senior Indian Postmaster, Postmaster General (Mail and BD) Harpreet Singh said – The credit for the achievement is his staff in the front line. Those who showed passion in this era, met people, provided services to them. Especially when buses and trains were all closed. He said- We availed the services of special parcel rail car and freight trucks. Provided timely services to remote parts of the country. Medical supplies were transported from Pune to Corona Test Lab to Bhutan. Singh said- Some employees were also infected with corona in this order, sent to separate. The goal was found amidst all the challenges.

Another senior official of the postal department said – India Post Payment Bank’s AEPS facility enables withdrawal of money from the accounts of any scheduled banks at home. Adding to this, about 28 million crore transactions were done in about 1.8 crore post office savings bank transactions. Under the Aadhaar-Enabled Payment Service (AEPS) facility, a customer, irrespective of his account in any bank, can ask for money at his home through a postman.

For this, there is no need for a customer’s savings account in the post office. As per the data, in addition to people living in rural areas, around 52 lakh direct benefit transfer payments worth Rs 480 crore have been made during the period of full ban, giving huge support to PwDs and pensioners. Due to strict restrictions on railways and state road transport, India Post thought differently during the crisis. The department pushed its network and existing fleet of vehicles into the public welfare campaign.

Perhaps this is the reason why Prime Minister Modi on his Twitter handle praised the works of the Postal Service by adding the tweet of Union Minister Ravi Shankar Prasad. According to the data, the postal department has supplied more than 100 tonnes of only medicines and medical supplies during the month of April only during the full ban. These included medicines, test kits and ventilators, etc. The department has used cargo planes and delivery vans for this.

More than two lakh postmen and Gramin Dak Sevaks pushed themselves to the task that the beneficiaries of government schemes get timely funds with the help of ‘Postal Payment Bank of India’. During this period, the department made special arrangements to transport postage within states and from one state to another.

Delhi becomes a role model
On entering all the post offices of Delhi, slogans written on plain paper grab the eye of the visiting customer. People who are dealing with ‘B-positive: mind to mind and not to body’, ‘beware of corona: we too and you too’ etc. can be seen tackling their work on the counter. For most services, there is a ‘yes’ at the counter here. But with adherence to certain parameters including social distance. Among the shocking facts is the postman’s hulia with a khaki uniform. Holding gloves, hats, goggles, masks and towels on the body, the postman also carries a sanitizer with a postal bag, so that he can sanitize their hand before acknowledging the receipt or acknowledgment.