Silver 6500 rupees soon after the announcement of Russian Corona Vaccine, know how cheap gold has become 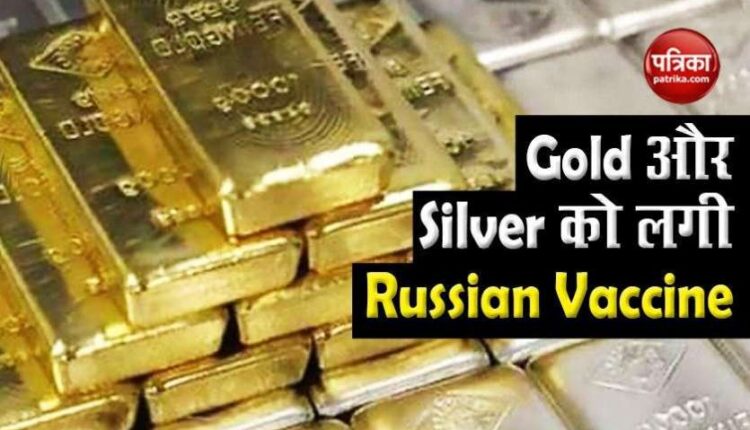 new Delhi. The Coronavirus Vaccine, which the world was waiting for, was announced by Russia’s President Vladimir Putin. After which there was a huge decline in the gold and silver price in the international market. Which was also seen in the Indian futures market. Silver price slips in the domestic market came down by Rs 6500 against yesterday. At the same time, the price of gold (Gold Price Today) fell by up to Rs 2900. According to experts, there has been a sell-off in the gold and silver prices due to the rise in the US dollar, better price data of the Consumer Price Index. Let us tell you that last week, gold in the domestic market has crossed the level of 56 thousand rupees per ten grams. On the other hand, silver had reached the level of 78 thousand rupees per ten grams.

Also read: After the accident, Air India Express will get about Rs 373 crore from the insurance company

Gold and silver rolled in foreign markets
First of all, when it comes to the price of gold and silver in foreign markets, gold on Comex is currently trading around $ 1945 per ons, with a fall of 80 Dollars per ons, September contract at 9:10 pm Indian time. The same is seen in European and London markets. European markets are trading at 1651 euros per ones, down 76 euros per ons. In the London market, gold is trading at 1486 pounds per ounce, falling by 65 pounds per ons. On the other hand, the September contract silver on Comex is trading at $ 27.16 an ons, down by more than 7%. Europe and UK markets are also seeing a decline of over 7 per cent. As a result, silver prices in both markets have increased to 23 euros and 21 pounds per ons, respectively.

Also read: Supreme Court’s big decision, in any case, daughter will get half right on Paternal Property

Gold up to Rs 2,900 cheaper in domestic markets
The impact of the steep fall in gold prices in the international market was also seen in the domestic futures market. Today the price dropped to Rs 2,900 per da gram as compared to Monday’s trading session. Gold is trading at Rs 52,188 per ten gram, falling by 5 per cent to Rs 2,758 per ten grams in the domestic market at 9.25 pm. Whereas today gold fell to Rs 52,022 per ten grams. On Monday, gold prices closed at Rs 54,946. On the last trading day of the previous week, gold reached a life time high of Rs 56,191.

Gold and silver prices fall
According to Ajay Kedia, director of Kedia Advisory, today, after the announcement of the Russian vaccine of Corona virus, there has been a sell-off in the price of gold and silver. This is an indication that the global economy can be brought back on track by defeating the corona virus. At the same time, according to Angel Commodity Deputy Vice President (Commodity and Research) Anuj Gupta, the US index is seeing a boom from this morning. Due to which, there is a pressure in the price of gold and silver. The second reason is the selling of gold and silver in the US due to better than expected consumer price index figures.

Sanjay Dutt gets lung cancer, America will go for treatment