We’re all quitting, Burger Kings employees resign at once 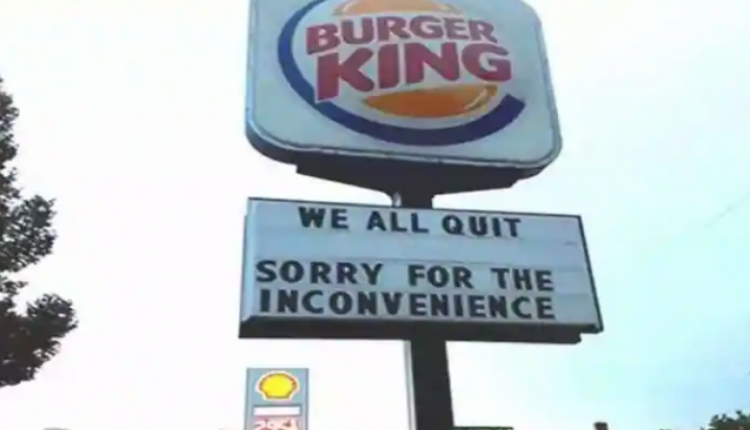 New Delhi. The impact of the corona pandemic is not only on the Indian economy or market, but worldwide. During the Corona crisis, it is proving to be a big challenge for the employees doing jobs in the private sector. The ups and downs of the company have also had a profound effect on the personal life of the people. Millions of people have lost their jobs. But today we are going to give you information about a company whose entire staff, being unhappy with the policies of the management, resigned at once.

Everyone surprised by this announcement of the employees

This case is related to all the employees working in the outlet of Burger King located in Nebraska, America. All the employees here have announced to leave the company together. Everyone is shocked by this announcement. Due to such sudden resignation of employees, people are questioning the policies of the company. People on social media are constantly trying to know the reason behind this. According to the staff of Burger King, he was unhappy with the arrangement of work in the company. He also mentioned his problems many times in front of the management. But for a long time their problems were not taken care of. Not all the employees of the outlet were happy with the arrangement of work. When no action was taken on repeated complaints, everyone made up their mind to leave the job together.

After this incident, the workers of Burger King put up a board outside after leaving the job. On this sign board the employees wrote – We are all leaving the job, sorry for the inconvenience. This picture is becoming increasingly viral on social media. People are constantly sharing their reactions on this. Rachel Flores, who works as the general manager of this Burger King outlet, also shared this picture on her Facebook ID.

Everyone knows why poor laborers left their jobs.

Writer Taslima Nasreen, exiled from Bangladesh, has given her response on Twitter. He wrote in the tweet – All employees of Burger King in Nebraska have left their jobs. We all know why poor laborers quit their jobs.

Read More: Pension of 36 thousand rupees will be available in just 55 rupees, register from here