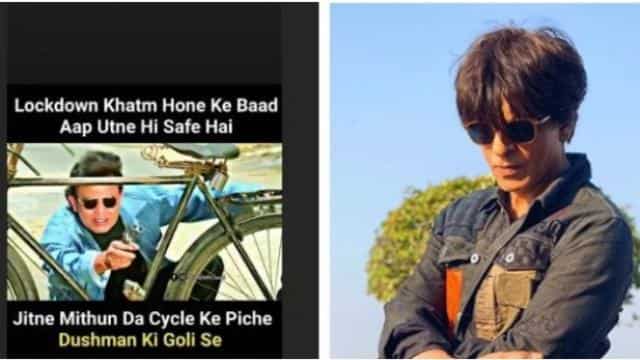 Bollywood actors Arjun Kapoor and Varun Dhawan have strong fan following on social media. Both do not hold back from pulling the legs on each other’s posts. But this time, both of them had a look at the lockdown situation. Actually, both of them have shared a meme on Instagram, which is associated with Veteran actor Mithun Chakraborty.

2- Anushka Sharma shared the childhood photo, sitting on the lap of brother Carnesh and laughing and laughing

Bollywood actress Anushka Sharma has been away from films for a long time. Recently he has produced the web series, titled ‘Patal Lok’. There is a lot of craze for this web series among the fans on social media. Nowadays due to the lockdown, she is spending time with husband and captain of Indian cricket team Virat Kohli.

Everybody celebrated Eid in India on Monday. All the celebs congratulated the fans on this occasion, but Shahrukh Khan wished the fans late. Shahrukh tweeted, ‘May Allah keep his blessings on us during this difficult time. In the end it is faith that sustains us. Happy Eid to all. May Allah give love, peace and prosperity to all. ‘

Ex-Bigg Boss contestant Mandana Karimi was recently rumored to be Corona positive. In such a situation, to explain this, Mandana recently organized a live video. In this, he told the audience that he had an infection in his eye, which was caused by cleaning the house. He was touched by the chemical in his hand, due to which he had to suffer.

‘Tarak Mehta Ka Ooltah Chashmah’ fame Babita ji a.k.a. Munmun Dutta has gained a lot of popularity from the show. In the show, she plays Babita ji and her friendship with Jethalal entertains the audience a lot. Dilip Joshi a.k.a. Jethalal is also seen hitting healthy flirt with Babita ji. Babita keeps looking for an excuse to stay with him. The audience also likes this style of both.

6- Salim Khan celebrated Eid without son Salman, said- congratulated each other on the phone

Salman Khan celebrates with the family with great pomp every year. But this year the Khan family celebrated Eid without Salman. Talking about this, Salman Khan’s father Salim Khan said, Salman has been in his farmhouse for a long time. I spoke to Salman on the phone and we congratulated each other.

Anupam Kher is very active on social media. He keeps sharing many fun posts. These days he is posting a lot about the lockdown, but the post he has shared recently is being liked on social media. Actually, Anupam has shared a photo of a pair of shoes. In this photo, there are coplanes of plants on the shoes. While sharing the photo, Anupam wrote, ‘Lockdown effect’.

8- Kavita Kaushik shares a romantic photo with her husband, wrote- Find a man who can make you queen

TV actress Kavita Kaushik recently shared a special post for her husband. Kavita has shared a photo with husband Ronit Biswas in which he is kissing the actress. Kavita shared the photo and wrote, “Find a man who may not be a king himself, but keep you as a queen.”

9- Vidhu Vinod Chopra was trolled for the film ‘Shikara’, the director replied in an open letter

Filmmaker Vidhu Vinod Chopra has responded in an open letter to criticisms about his upcoming film Shikara. This letter has been written by students of Kashmiri media.

Navjot Singh Sidhu replaced Archana Puran Singh in The Kapil Sharma Show. Archana has joked on the show several times over replacing Sidhu, but recently Archana has spoken openly about this in an interview. Archana while talking to Tel Chakkar in Instagram live chat said that I have not taken the chair of Sidhu. I am just doing my work.