Covid19: There are chances of riots for bread, Narendra Modi create ‘national’ government 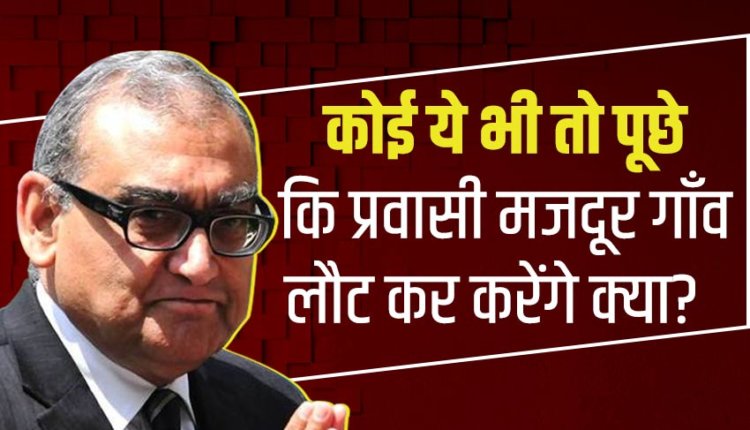 Markandey Katju: During the nationwide lockout announced by Prime Minister Narendra Modi, the Indian media showed millions of migrant laborers who worked in many cities and towns of India, walking hundreds of kilometers, returning to their villages and homes on TV screens and internet streams. . Many of these people died on the way. There is no doubt that this nationwide lockout has caused a lot of hardship and pain to these people and their families, but the more important question that no one asks is what all these people will return home to? They went to cities in search of livelihood because there was no means of livelihood available in their own villages.

In 1947, undivided India had a population of about 45 crore. Now after being separated from Pakistan and Bangladesh, it has become about 135 crore in India alone. That is, about 4 times increase in population. Hence, there is a huge burden on arable land (which is cultivated). Furthermore, machines have displaced human labor to some extent. After 1947, due to these facts, a large number of villagers moved to the cities. It is estimated that in 1947 85% of Indians were living in villages and 15% in cities. Today it is believed that only 60–70% of Indians live in villages, and 30–40% of people live in cities. Now, when crores of people who have migrated from villages to cities return, the question arises – what will these people do in their villages? There is no work for them there. They will only become a burden on their relatives, and will rarely be welcomed. In the cities they were earning some money and used to send wives and children to the village. Now their wives too will hardly be happy on their return, because now they will not be able to earn for their families. Conversely, they may also need to spread their hands in front of someone else for two days of bread.

This entire incident is reminiscent of John Steinbeck’s great novel Grapes of Wrath. It was about migrants who migrated from Oklahoma, Texas, Arkansas, and some other states in the United States to California because of the Dust Storm and the economic recession that began in the 1930s. They all came thinking that after reaching California they will get some work, but something else happened. The workers already there strongly opposed these migrants. Thinking that these will reduce the wages and diseases will spread.

Steinbeck wrote in his novel – “Ripe grapes spill their juices when pressed for wine” (juice of ripe grapes makes wine). Similarly, the migrants were filled with anger and boiling with anger. The weight of anger was increasing in his soul. Looking at the situation today, the same can be said about India. I am afraid that if the government does not take concrete steps to improve the situation soon, there will be riots in many parts of India to raise food items and a law and order problem will arise on a large scale. Just as it did in France in 1789, when there was a severe shortage of food in Paris and other cities, which resulted in the French Revolution. Or as women demonstrated in St. Petersburg, Russia, due to food shortages and the result of which was the February Revolution of February 1917. The Prime Minister should now consider forming a national government, in which many scientists including the leaders of the current opposition parties , Technical and administrative experts all join. As British Prime Minister Winston Churchill did in May 1940, to deal with the threat of invasion by Nazi-Germans.