Freeeway Bridge collapses in California Due to Heavy Rains 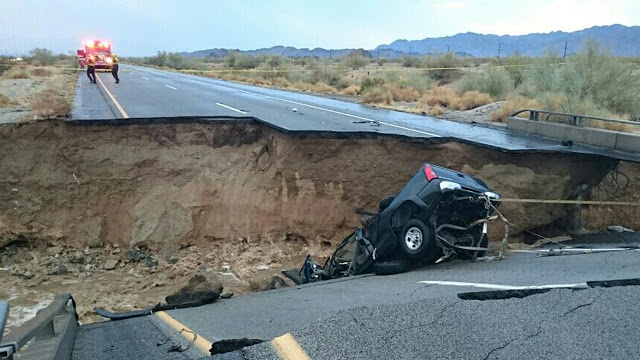 Interstate 10 has seen a forced closure due to the collapse of the Tex Wash bridge near the Joshua Tree National Park. The Interstate 10 Highway is one of the most popular commuting paths between Southern California, and Phoenix saw hundreds of motorists stranded in both directions. One driver has reportedly been hurt after his vehicle crashed due to the bridge collapse.

The Riverside Fire Department’s rescue workers immediately arrived at the scene of the incident. The passenger was able to escape the crash with the driver needing rescuing from the Fire Department. The Firefighters went into the gushing water which was always rising braving the asphalt and debris to pull the driver out of the crash. The driver was strapped on with protective gear and hauled to safety. The bystanders used a belt to harness the car to the guardrail to prevent the vehicle from being washed away by the torrent.

The Tex Wash bridge was believed to be structurally sound. The section of the bridge typically dry saw torrential rains in the nearby area. The dry weather coupled with the freak weather storm which brought in large river torrent overwhelmed the bridge’s structural capabilities. Caltrans’s structural engineers will assess the situation on Monday and will only reopen the highway after the necessary repairs.

Hundreds of cars were reported to be stranded on both the sides of the road after the collapse. There were reports of miles of traffic on both sides. The drivers were requested to take a detour that would have added some drivers 2.5 hours to their journey.

California is going through a drought period in the recent years. Thought rains are welcome in the parched lands such sudden weather anomalies tend to cause large disruptions to daily lives like flooding roads, uprooting trees and causing severe power outages.

Wayne Rooney hints at a possible future in MLS