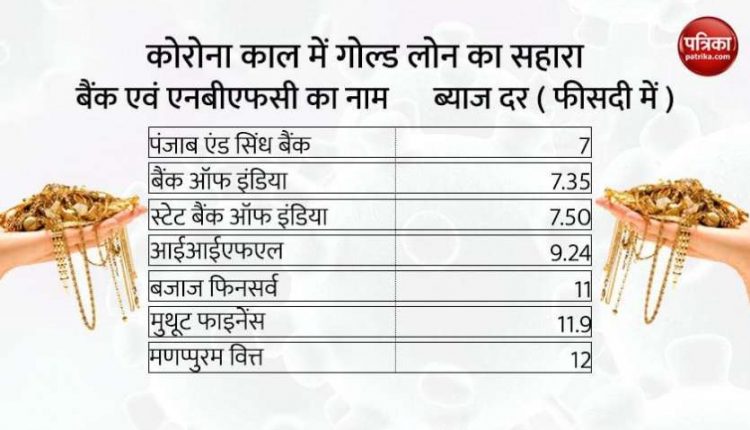 new Delhi. The gold buying season may be behind us, but the usefulness of the yellow metal exceeds its luster and ornamental value. In the crisis that the world has seen in the last eight months, gold can be used many times to raise emergency funds. Unexpectedly, the demand for gold loans has increased during the Kovid-affected period. The special thing is that during this time there has been a decline in the rate of gold loan. This has made it easier for borrowers to mortgage their gold holdings to raise funds.

Gold is the cheapest in these banks
Currently, the cheapest gold loan is from Punjab and Sindh Bank, which charges only 7% per annum for a loan of Rs 5 lakh with a tenure of three years, according to BankBazaar.com data.

IIFL Finance offers the cheapest rates, starting at 9.24 per cent, followed by Bajaj Finserv 11 per cent, Muthoot Finance 11.9 per cent and Manappuram Finance 12 per cent.

Also read: Inflation of petrol and diesel hit the common people, know how much weight was lost in your city today

Why were these banks included
All these banks and NBFCs offering gold loans are listed on the stock exchange. Whose data has been collected and placed in front of you. Banks whose data is not on their website have not been consented. This complete data is available on the websites of the respective banks till 19 November 2020. This bank has been given an interest rate for a loan of Rs 5 lakh with a tenure of three years.

Which documents are required?
The bank or NBFC asks you to provide various documents to take a gold loan. Generally the documents required include proof of your identity like PAN, Aadhaar etc. and proof of address like Aadhaar, passport, voter-ID card etc. and your photograph.

What are the charges?
For loans such as home, auto and personal loans, the borrower usually has to pay the processing fee / fee to get the loan. When taking a gold loan, in addition to the processing fees, an applicant may be asked to pay for the valuation of gold which will be used as collateral by the lending institution. For example, HDFC Bank charges a fee of Rs 250 for loans up to Rs 1.5 lakh and Rs 500 for loans.

This company of Ratan Tata made huge money in the month of November, know what is the whole matter