Khadi breaks record in Corona era, sales of 1 crore in one day on Diwali 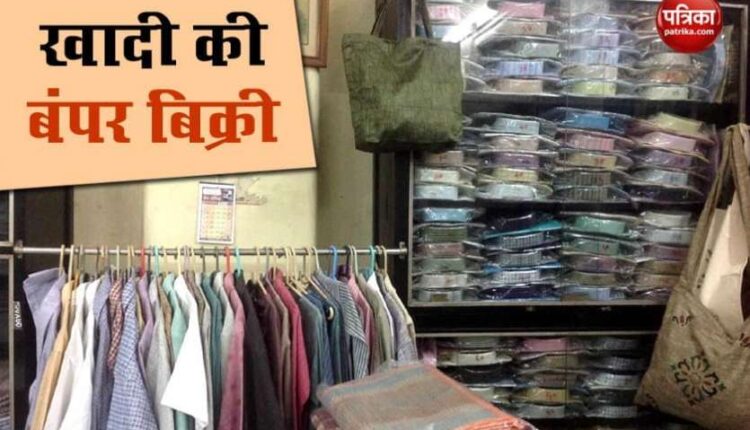 new Delhi. Even though most of the businesses have come to a standstill due to Coronavirus Pandemic, this time there has been a tremendous boom in the dying Khadi business. Under the Make in India project of PM Narendra Modi, the emphasis is on the use of Indian goods. It also includes the Khadi industry. On the occasion of Diwali, there was a tremendous sale of Khadi clothes. This season of festivals recorded a record of tremendous sales at the Khadi Gramodyog sales center located in Connaught Place, Delhi. It is said that on November 13, sales of up to one crore rupees have been made. This is considered a good sign towards promoting the Khadi world.

It is said that in the 40 days since October 2 this year, Khadi’s one-day sales figure has crossed the one crore mark for the fourth time. Since the unlock, the country’s economy is slowly returning to track. But the Khadi industry has benefited the most. This year, on Gandhi Jayanti (2 October), Khadi India’s Connaught Place outlets have sold 1.02 crore rupees and 24.05 million rupees on 24 October and 1.06 crore rupees on 7 November.

The chairman of the Khadi and Village Industries Commission (KVIC) credited PM Modi’s appeal to promote the “Swadeshi”, especially Khadi, for the Khadi industry to stand on its feet again. According to media reports, he says that “It is heartening to see a large number of Khadi lovers coming to support the artisans who form the backbone of the Khadi and Village Industries sectors.” Despite the epidemic, Khadi artisans continued the production activities vigorously and fellow countrymen supported them with the same enthusiasm. ”

Production continues under lockdown
Most businesses were stalled during the nationwide lockdown due to the Corona epidemic. But even during this difficult period, KVIC continued to manufacture Khadi related goods across the country, in addition to clothing, mass production of products such as face masks, hand wash and hand sanitizer were also done.

Milind Soman picked up garbage in the middle of the trek, said – we should be smarter than monkeys

Talking on the phone for hours will be expensive! Companies are preparing to increase tariff plan prices