Between the COVID-19 / Coronavirus era, the Narendra Modi government on Saturday announced the fourth installment of an economic package of 20 lakh crore. The Center announced several major reforms aimed at accelerating the sluggish economy, including increasing foreign direct investment (FDI) limits in defense manufacturing, privatizing six other airports, opening more airfields for the civil aviation sector and Commercial mining of coal involves steps to give entry to the private sector.

Finance Minister Nirmala Sitharaman said that power distribution companies (discoms) will be privatized in the union territories. This is expected to lead to a model of improving efficiency and attracting investment, which will later be replicated in other states.

Meanwhile, the Rashtriya Swayamsevak Sangh (RSS) -based Bharatiya Mazdoor Sangh (BMS) strongly opposed the Centre’s move. The statement said, “The fourth day of the Finance Minister’s declarations is sad for the country and the people of the country, who were on the seventh sky after the first three days of announcements. Eight sectors (coal, minerals, defense production, airspace management, airports, power distribution, space and atomic energy) have been emphasized, but the government is saying that it has no choice but to privatize in this hour of crisis . ”

BMS claimed that privatization for employees meant that large scale jobs would be created, low quality jobs would be created and only profit making and exploitation of people would remain a rule in the sectors. Without any social dialogue (mass dialogue), the government is making big changes and going in the wrong direction. Social dialogue is the basic thing in a democracy. The government is shy in advising and talking with trade unions, social representatives and stake holders. And, these things clearly show the lack of confidence in the government. Read the full statement below: 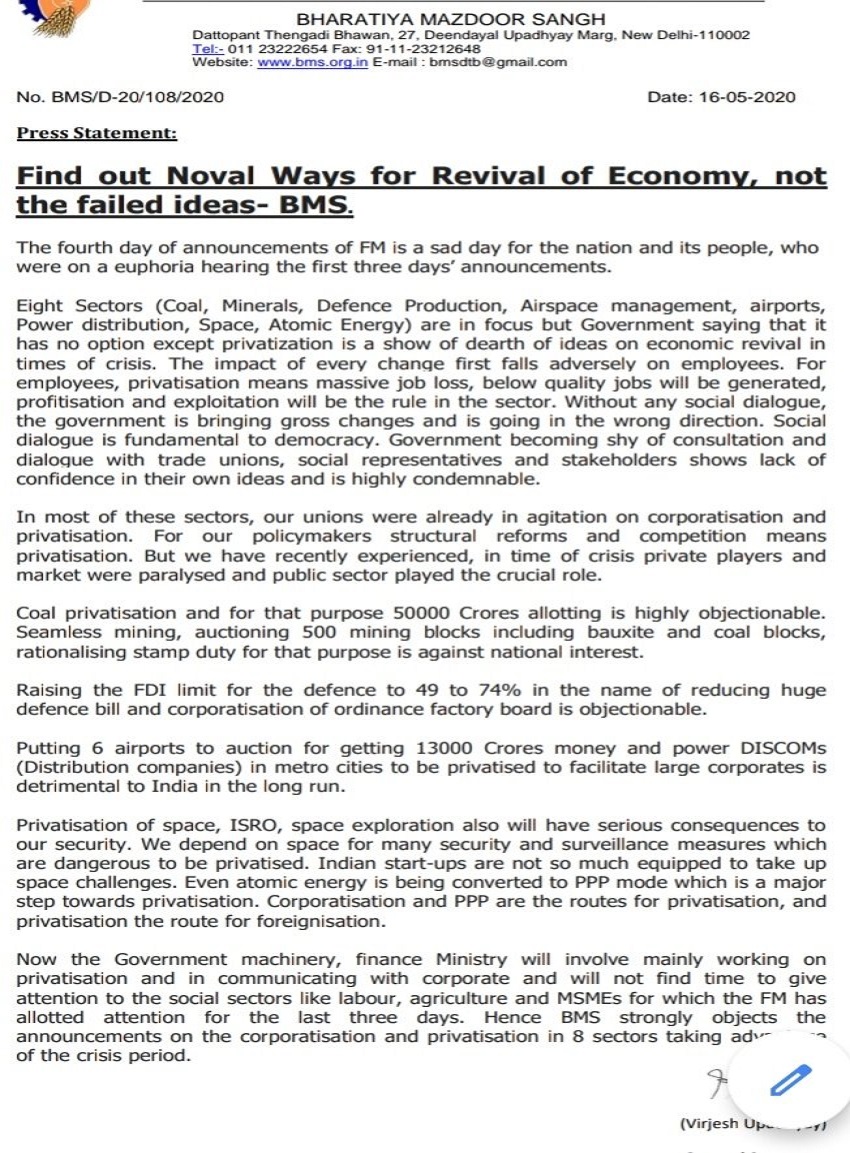 At the same time, the country’s major left parties targeted the government on Saturday for the fourth installment of the economic package and alleged that the government is using the epidemic of Kovid-19 to privatize the country’s public assets. Sitaram Yechury, general secretary of the Communist Party of India-Marxist (CPI-M), tweeted, “It is inhumane to use lockdown and pandemonium to impose the bourgeoisie’s agenda and make big profits.” Looting of national assets ends self-reliance. ”

He said that the government should tell how it used the lockdown period to improve the health structure of the country. Communist Party of India (CPI) General Secretary D Raja alleged that the announcements made by Finance Minister Nirmala Sitharaman were aimed at privatization and corporatization only and only. “After failing to deal with the Corona crisis, the government is encouraging privatization and corporatization,” he said. It is very sad. It is ironic that on one hand they are talking of self-sufficient India and on the other hand they are handing over the entire economy in private hands. ”

On the other hand, the Congress also made it an issue and said that the increase in foreign direct investment (FDI) limit in defense sector and the attempt to ‘privatize’ ordnance factories are scandalous as these subjects are related to the security and sovereignty of the country. Party spokesman Gaurav Vallabh also said that the government and Prime Minister Narendra Modi should tell how much money went into the pockets of the common people of the country by the announcements made so far.

He claimed in an interaction with the communicators via video link, “Ordnance factories are being privatized in the name of incorporation. Ordnance factories are our strategic assets, we strongly oppose the privatization of them. “Vallabh said that the Ordnance Factories need to be modernized, not privatized. The government should announce new investment and use of new technology for this modernization.