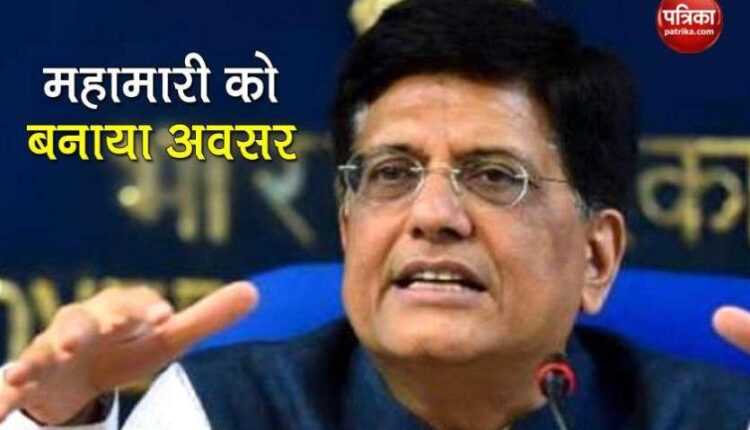 new Delhi. Union Commerce and Industry Minister Piyush Goyal said that the recent reforms undertaken by the government during the epidemic have strengthened India in other areas including mining, labor and agriculture. At the same time, the country has been prepared to join the world at full strength. Addressing a program, he said that the government has taken the epidemic as an opportunity to bring major reforms in various fields. He said that taking the Kovid-19 as an opportunity, we have brought such reforms in agriculture, labor, mining, capital markets and banking, space technology and defense which are very effective. This will strengthen India and make us to connect with the world with full strength.

Also read: The impact of Trump’s disease will wreak havoc on the world’s stock markets!

Goyal said that both business and government are working together for the better future of those sections who remain marginalized in the society. The Minister said that by working together no power on earth can stop India from becoming a superpower and economy that takes care of its people and improves the quality of life of every person.

Goyal said that this round of epidemic has tested the resilience of Indian businesses. Now India has not only become one of the largest manufacturers of PPE, masks, ventilators and medicines worldwide, but is also exporting them. He further said that the whole world has recognized that India has done unprecedented work to fight the epidemic. India’s ability to become self-reliant, have good manufacturing practices and improve quality has been appreciated by the whole world.

Export of raw materials will proceed
Earlier, Union Minister Piyush Goyal had tweeted that India would have to improve its manufacturing capabilities to move from exporting raw materials to supplying high quality products to the world. He said that self-reliant India is about effectively implementing Indian capabilities, quality, good manufacturing practices, improving standards as well as the standards that Indians expect in the country.