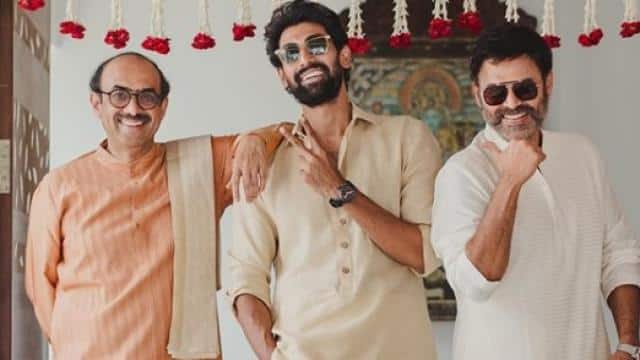 ‘Bahubali’ fame actor Rana Daggubati is going to tie the knot with Mihika Bajaj on August 8 today. Meanwhile, he has shared a photo post on social media, which is being very well liked. He shared this photo on his Instagram account. His father Suresh and Uncle Venkatesh are seen in the picture with Rana. He wrote Ready in the caption.

In the photo, Rana is seen in Daggubati traditional kurta and South Indian style dhoti. At the same time, his father and uncle are also seen posing in a traditional attire and posing. On the other hand, Mihika’s mother has shared the photo of the daughter on Instagram, in which she looks very beautiful. He wrote in the caption, My Baby’s day has finally come.

Please tell that on August 6, turmeric and mehndi function was done. Its photos went viral on social media. Turmeric ceremonies were held in Jubilee Hills, home of Mihika. During this, Mihika wore a golden colored lehenga. At the same time, Rana was seen wearing a white shirt and a traditional dhoti. After this, Mihika wore a pink lehenga in Mehndi Ceremony.

Abhishek, who was discharged from the hospital after the corona report came negative, said Amitabh Bachchan – God is great

Significantly, Rana’s father Suresh had told in a conversation with Times of India that only family members have been invited to the wedding. The film industry and outside have not invited their close friends. The truth is that the cases of Kovid-19 are increasing continuously and we do not want to endanger anyone’s life because of our celebration. Whoever comes to the wedding will be tested Kovid-19. Sanitizers will be placed everywhere at the wedding venue and social distancing will be followed. This is a happy occasion and we also want to make it safe. ”

Invest in Share Market with Paytm Money, you will get information of every moment of the market